Our last few rides have been nice. Nothing was wrong exactly. Things just weren’t quite right. The first one was rushed. My daughter was along on her mare, we had an hour before my husband who was home with the youngest had to leave. It was icy. We didn’t get to warm up at all. It wasn’t amenable.

The next ride was ok. We had our warm up. I may have drilled a bit too much on sending him out around an object. The mud was ankle deep. The ice was still there. Rusty was feeling energetic and would have like to buck. Then he was anxious to get home. We went back and worked back and forth in front of the other horses in their pen. It wasn’t a bad ride. But it didn’t leave me feeling that glow that comes from a good ride. I left feeling as though we had argued.

Yesterday, finally, we had a ride that didn’t have any undertones of conflict. We had a nice warm up. I didn’t work too long on sending him out around our barrel. We worked on targeting a little. Then got on and went out around the yard. We worked, calmly, on stopping from a walk. He didn’t want to at first. He was full of energy and wanted to move out. Why would he want to stop when we had just started? We trotted on a loose rein along the feed bunks. We went to see what the cows were upset about. We walked through the water running down the driveway. We walked between the towering stacks of hay in the stack yard.

Then we went back to the horses and worked back and forth in front of them. Trotting along the feed bunks again I sat and whoad and he did! Slammed on the breaks. I gave him a chunk of apple and asked him to back up. I remembered an article I recently read and clicked him as soon as he started to step backwards. After he finished chewing we did a rollback and trotted off the other way. In his enthusiasm he broke into a canter. There was no immediate bucking. I sat and tried to remember how to ride a canter not in a defensive position. We cantered nicely the length of the horses pen and well into the calves portion. Then I sat and said whoa, and he did!

As he started the stop I dropped the reins onto his neck and let him do it all on his own. Another good reward, so glad the kids didn’t finish their apple snack earlier. A step backwards, a nice rollback and off the other way. He isn’t leaping into a canter out of the rollback yet, but I’m not asking for it yet either. Trotting out is good for now, we’ve hardly worked on this at all. It never ceases to amaze me how quickly horses pick up on things when it is a fun game for them with food as a reward.

Finally a ride that left me, and hopefully him, happy and glowing. Today it is supposed to be in the fifties and there’s no way I’m going to be able to get out and ride. Oh well hopefully the happy will last until we can go play again. 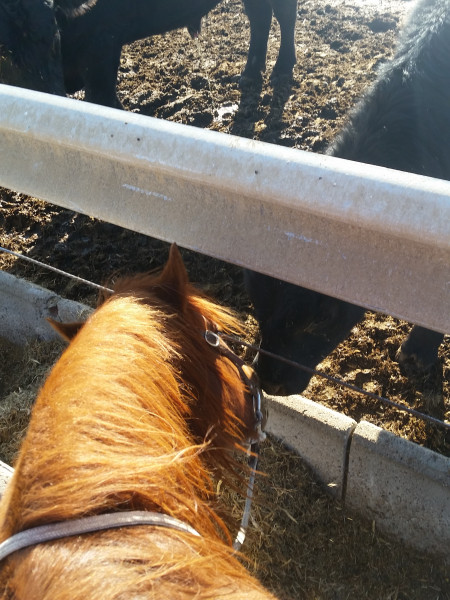 One thought on “Getting Along”