Which is a completely untrue statement.

My sister in law found him with no trouble at all after I searched and searched with no luck. He has his own Facebook page. He is a beautiful stud, long and lanky and a very pretty color. I think he looks like an older Rusty. But I also think it’s interesting that she got him out of a bad situation and apparently Rusty has a brother who was picked up by the humane society in Ohio.  That’s a lot of bad luck in one family. 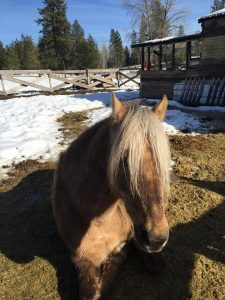 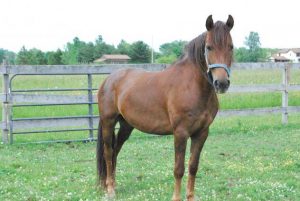 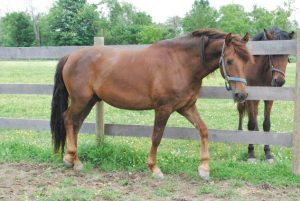 There was even a picture of Rusty as a baby!

And his dam, with a different foal:

What fun. Thanks Stephani for finding him!

The girl who owns State Line Gold Radiance has been great. She trained Rusty’s dam  and says that she was very petite and like Rusty “Had no respect for space mostly or proper manners lol but she came along very nicely. The key was trust once I had that. Even when she got scared she would look to me. From there she progressed with ease. No buck or rear no bite. I loved her. I had her for almost 60 days. Had her saddle trained. Well behaved. Loading into a trailer like a lady (getting her in to my place was a nightmare. Tried to climb into the manger) had her started out on trails. Green but she was definitely ok to be out there. Very curious.”

She has nothing but good to say about Rusty’s sire, calm, quiet, friendly, good with kids. It sounds like the colts by him with the lady who owned him before her were mostly unhandled and barely halter broke. Even so that’s, sadly, not unusual for breeders, the place doesn’t look bad in the pictures, and she was putting some money into training, so how did Rusty get from there to the kill pen?

One thought on “I found His Dad!”