Summer is always hot but this was exceptional. The year had been bone dry. No rain, no grass, no hay to be putting up. That was why I was there in the first place. Without the usual hay to put up there was time for things like horse shows. This was not the first or the last of the days well up into the hundreds.

Luckily the showgrounds were set on the banks of Rapid Creek. The river ran through town and was probably pretty nasty by the time it got to where we were. The horses didn’t mind though. It was still cool and refreshing. I had a parking spot right next to the path that lead down into the water.

In between classes and almost every time she dried out I lead or rode Jerry down the shallow bank and out into belly deep water. When I rode we waded right inn. When I lead her I walked to the edge and let her go as far as she wanted on the end or the lead. Even in one hundred and ten degree weather it wasn’t worth walking around in wet jeans. The soaking made her able to perform enthusiastically in our first class. She worked her heart out, walked quietly through the trail portion, stopped hard in the reining, and went after the cow hard and fast. We placed nicely in the amateur ranch horse class.

I was proud of my little gaited Morgan mare. She was tiny at about 14.2hh. Her coat shown like a copper penny, brilliantly orange. She was a delicate refined little mare, unmistakably feminine. Did I mention gaited? Out there with her belly in the dirt she would pace back and forth cutting the cattle. People told me a gaited horse couldn’t work cattle. She did it anyway.

We had done well in our class. She was proving herself capable. So I had entered us inn the open class.

It would be a bit much for us but might as well enter as many classes as possible. It had been a long drive, might as well make it worth it.

As the time for the open class got closer clouds appeared in the sky to the west. Sitting at the gate waiting our turn the wind hit. The judges umbrella took off across the arena. Sand blew everywhere. It  was our turn to go in the gate.

Then the rain started.

Rain storms in  droughts are not kind. They  bring more trouble than they are worth almost bringing damage and seldom much moisture. We entered the arena pushing into rain that blew down sideways. It pelted our eyes so hard I could barely see. Jerry turned her head against it and walked forward with a slight prance to her step.

We made it through our run. I think  the rain stopped by the time we worked our steer. Jerry carried herself with her usual aplomb, as honest and willing in the arena as she always was at home. The rest of the competitors rode in dry weather even the wind gone. Rain storm and all she took seventh that day in our first open class. She finished that year and the next, just as hot and dry, winning or placing well in every class we entered.

It’s amazing what a little horse can accomplish when no one tells her she can’t do it. 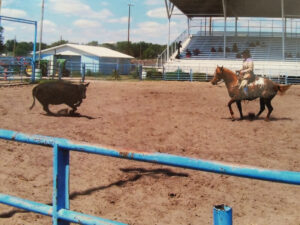 One thought on “Storm”