Or my other double swirl horse.

I know this blog is supposed to be about Rusty but I can’t not mention my favorite little rescue horse ever.

He was an ugly little two year old sold at auction. The reserve his owners meant to apply to the well bred group forgotten along the way somewhere. The two siblings he came with brought way more money. He was plain and scrawny and sold for a couple hundred to a man we knew only by his bad reputation. My mom, there only to watch and in no way looking for a horse, sent my brother to find the owner and make an offer. Their neighbor, my former dressage instructor, had bought one sibling and hauled the new horse home. Mom has been rescuing horses since long before it was cool.

Mom named him Coyote, after the souix stories and true to his name he spent his time at his new home trying to kill himself with many stitches and visits from the vet then was sent out to me for training. I never sent him back and my loving mother let me have him.

He’s saved my butt so many times I lost count. He’s moved cattle to shelter in blizzards, with the snow blowing so thick I couldn’t see a thing. He stopped to gather calves I missed in the blinding white. He’s drug calves at brandings, he’s shown and done very well in ranch horse classes against good competition, he’s told me he doesn’t like to show just leave him alone and let him chase cows. He will happily work cattle all day with scarcely a touch of the reins but I got on him once without anything on his head and got off again immediately, once he finally came to a stop. There was the time the angry mama cow ran under his belly, he reared, striking at her as she charged him. She went right under, he bit at her as she came and he was biting the other side as she ran out. He tried to kill me, crow hopping down a tall, steep hill with no way for me to escape. He stayed upright as we galloped across ice and mud as slick as grease to turn the herd, never even slipping.

He responds to the lightest touch, leaping to obey, sometimes. He has strong opinions and lets them be known, especially if  my request goes against them. He thinks for himself what would be best for us to do and often comes up with ideas on his own. He taught me my first “trick”, when he decided on the right way to get a calf up and moving. I often call him my big red heeler as he drops his nose to the ground and scoots some slow moving calf along with his nose. He carried me safely while I was pregnant and gave my children their first rides.

He’s getting some age on him now, his hocks are a bit stiff, though other than that he doesn’t let it show. He’s still hot and a little crazy and so much fun to ride, even if most of the time we ride around the yard bareback in a halter. I can’t believe it’s been sixteen years now, he’s nearly twenty. Where did the years go? I will never be able to replace him, no other horse will be so trustworthy and so completely crazy all rolled into one. He’s my Yoder and I hope he makes it to forty. 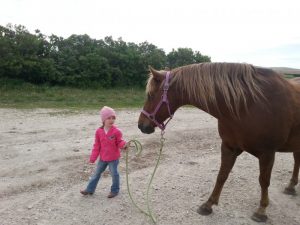 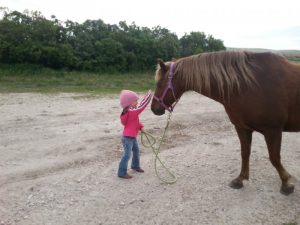 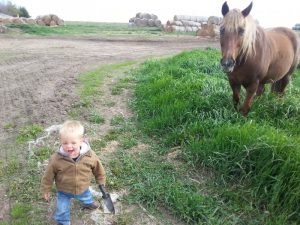 One thought on “Worth His Weight In Gold”