I was shopping at Walmart a while back, always as much of a social excursion as a shopping trip, and ran into a lady I hadn’t talked to for years. I was glad to see her, we had been friends but lost touch. Years ago I started her big beautiful horse, Debo. He’s a Paso Andalusian cross, black, with lots of hair and even more personality. He’s one of the horses I look back on and wish I had been doing clicker training when I worked with. It would have suited him perfectly.

The first thing she said to me was that she wanted her horse, Debo, to learn to bow. I was a bit taken aback. Did she somehow know that I was teaching my horse that exact somewhat obscure and unusual thing? That was a pretty big coincidence. But, no, she hadn’t somehow stumbled across Rusty’s blog it really was that big of a coincidence.

It wasn’t until after Thanksgiving that we were able to get together and play with Debo. He was just as friendly and in your face as ever, so much like Rusty in so many ways. The two of them have spent the last decade!??? (how has it been that long?) trail riding happily together and he’s mostly a very good boy. Unfortunately he comes with one major flaw, he’s too tall! His owner is somewhat challenged in the height department 😉 and has a bit of trouble reaching the stirrup. Debo knows how to step over to a mounting block, or whatever is handy, but out on the trail often nothing is handy.

We decided that a bow is nice and might work great but for a shorter term goal parking out would help her get a couple of inches advantage. I really wanted to do some clicker training. Debo can be very pushy and, as I mentioned, in your face. He is not fed treats by hand. It was a small problem. We compromised and rewarded with a good scratch following the click. He did pretty good, he is a smart boy after all. By the end of the day he was moving his feet forward when asked and we started on a foundation for a bow.

A couple of weeks later I made it back, it is winter and the week in between was COLD and a little snowy. Debo was as good as ever. Without being able to hand feed him or give treats we worked with loose hay in a bucket. With a food reward, Debo likes food he is a wee bit rotund, he was stretching out very nicely by the end of the day. A few more days like that and he’ll have it down I think. The bow we will keep working on. He offered lots the first try but needs more practice on the basics, lifting his foot and backing with a light touch to the chest. Not that he doesn’t do both beautifully, they just need fine tuned specifically for this exercise. The first day the farrier was coming out later, I had to be sure to put things back the way they were so he didn’t offer to “bow” when asked to pick his feet up. I would have been in big trouble for that! 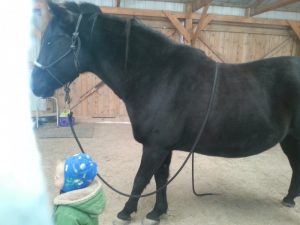 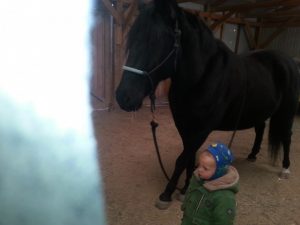 And my trusty helper