It was pretty nasty, freezing rain followed by wind driven snow and sub zero temps. The kind that gets the animals good and wet before freezing them. I got the barn opened up and led the horses in, a couple of times. I didn’t lock them in, there have been a few, three or four quite a lot for our sparsely populated area, fires in the last month and I couldn’t do it. They chose not to stay, preferring their wind break. Their choice and they were no worse for the storm even if they worried me sick.

As the snow recedes somewhat we have been finding poor little animals that didn’t make it through. A opossum in the horses corral, we didn’t think we had any around here it came as a surprise to find the poor guy. Felt even worse because of their scarcity, they are supposed to eat ticks by the pound and we do have plenty of those. My daughter found a little sparrow, she carried it around for awhile, playing. Slightly disturbing, she was wearing gloves and it was still frozen solid so other than the rather macabre pet choice I thought it was unlikely to do any other harm. After she got tired of it the cat took over, also disturbing.

The cattle were up behind the wind break with lots of feed and the chickens in their coop. The snow blew clean off of the fields it might have provided moisture to. It did make lots of fun snow drifts around the yard that the children are enjoying but mostly was a completely worthless snow storm leaving us as desperate for moisture as we were before. 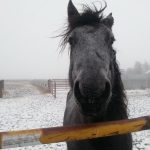 The first time I put them in the barn 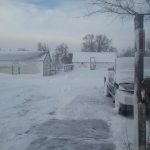 The barn they could have stayed in 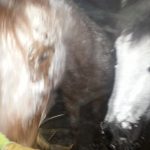 The second time I put them in the barn 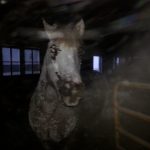 It was snowing even inside

They looked cool in their snow masks 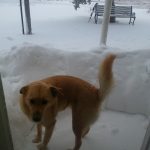 When we finally forced Daisy outside, very briefly. 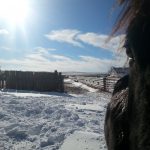 Still out of the barn 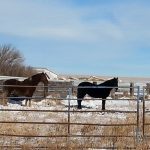 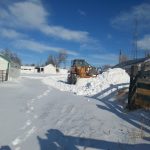 The only way to clear snow

3 thoughts on “Our Little Christmas Blizzard”