Has anybody else noticed that the really hard things seldom look impressive. The easy, flashy looking things people ooh and awe over like the dancing horses, tied and beaten until they dance impressively, or as that should be, prance nervously. At the horse fairs knowledgeable people think they look so cool while barely glancing at the meticulously and, for our example here at least, kindly trained upper level dressage horses. That wasn’t where I really meant to go with that but it is something that bothers me 😉

I trimmed Rusty’s feet today! For me that falls under the not impressive looking but hard category. How did I ever do it back when I’d go out and trim four or more horses at a time. It did nearly kill me physically but that still isn’t what I mean.

I neglect to work with his feet.

I know people who pick out their horses feet every day, or every time they see them if nothing else, will be horrified by that. I leave them be most of the time. They live out with plenty of room to roam and well drained soil, they’re not standing in muck. I prefer saying that we go all natural over any claim to neglect.

I work down around his legs regularly, bowing, Spanish walk and such, they have a close eye kept on them. So when I noticed it was time for a trim I started working on getting him to let me hold his legs up. We worked on this, he’s had his hooves trimmed before. Lately though me picking up a hoof meant bow, that needed to be untrained. Or retrained? Or possibly just reinforced that they are separate cues and lifting a foot can mean many different things not just bow and to pay attention to what I’m asking for.

The weather has warmed up from near zero to the low forties, a regular heat wave. So of course I haven’t been able to get out and work him. The youngest child and I did get out for a ride on Coyote, first time I’ve been ON a horse in months. It was a great ride and those two are adorable together but I wanted to work Rusty! Trim his feet preferably. 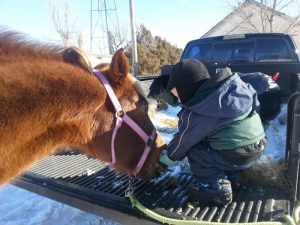 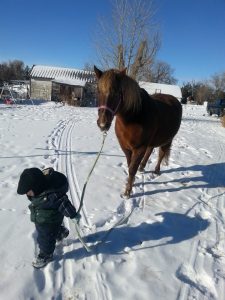 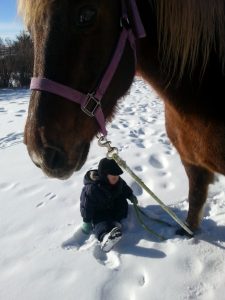 Hate it when they step on the lead though!

Today I made it out. He looked around, walked around and we worked on other stuff a little. Then he came to his mat and standing there with nothing on his head, out of his pen for the first time in weeks he stood and let me trim most of his feet.

Not that he didn’t let me trim them all, just that I could not do it. My arms were quivering, the muscles in my hands turned to jelly, I gave up. We went and worked on other stuff a little then came back and finished that last hoof. I’m going to pay for it, and for sitting here typing. My forearm is cramping and sore. I’m such a wimp!

And that is my grand accomplishment. I trimmed my horses feet. Not at all impressive from the outside but for us, we did good. 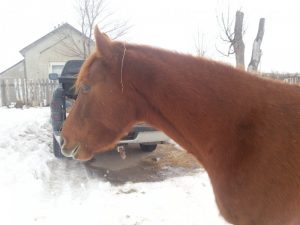 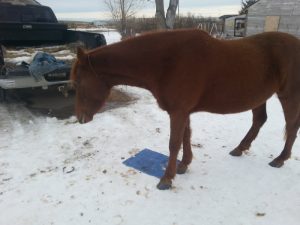 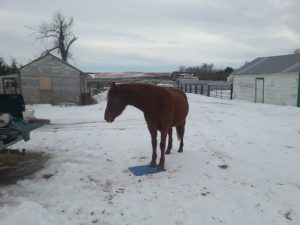