I turn Rusty out to eat grass, or tried to.

See this blog is still about Rusty, I haven’t left him completely for Princess Onna and her child.

After letting him out the gate I tried to shoo him away from me and my sandaled feet. I went in the house, leaving him in the yard, I’ve been forbidden to bring him in the house, and put a load of laundry in. As soon as I was done I went out to check on him and he wasn’t there. I looked around the house and found him waiting by the tailgate of the pickup. When he saw me he called out to say hi. “Was I ready to come work yet?” he asked.

How could I tell him no?

I grabbed the bag of treats we had been using with Princess Onna and we played. Just a quick run through of the basics. I did pause to put boots on, with my capris first. I thought about getting on but decided that a halter and helmet, at least, would probably be necessary and resisted the urge. He happily performed next to me and protested heartily when I told him I was done and to go eat grass. He refused to eat if he didn’t get to play for the food and I had to put him back in with the others. 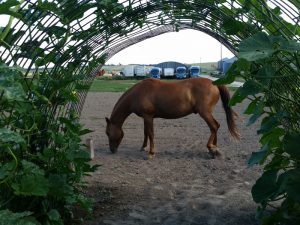