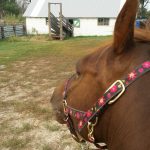 We’ve been doing some other stuff but, good old Rusty, nothing has changed there. Except his coat color. It’s the normal fall darkening but, WOW. He is very nearly liver chestnut, with a lighter red main and tail. Gorgeous.

I’ve managed a couple of rides on him and should be out getting another one now instead of doing this. He is thrilled to be back to work. When I bring in a horse besides him he paws the gate and screams. Last time I rode him we went off down the driveway by ourselves! He was perfectly happy to be going down the road, because we have spent so much time taking walks down it? As soon as I asked him to turn off into the corner of the pivot he had a small melt down but I was able to reassure him and we circled back that way and home for a nice, short ride.

This morning I brought him out with no intention of riding, and I didn’t a small child was following me around riding stayed out of the question. We did work a bit on painting, then asking him to put his foot forward. when we started clicker training we did a simple bow, one foot forward and head down. I asked for it the other day and he seems to have forgotten. We are relearning. I found that if I watch for which foot is about to step forward I can click as it hits the ground and before the next one picks up. I take a step forward with my corresponding leg, I put my left leg forward I want him to place his left fore forwards, my body position is asking for the walk, he starts to walk by moving his left leg forward. Wala! He has given me what I asked for. I need to be careful to ask for the leg that he has taken the weight off of and is planning to start walking with. It’s all about asking at the right time and making it easy. I think. It seems to be working.

I have watched him concentrate on this, more yesterday before I figured out the walking thing. He puts his head down next to mine and I swear I can feel him thinking. He is not an easy horse. Not that he’s bad in any way but he is so intense. He thinks so hard and pays so much attention that he can be a bit overwhelming. I’m sure it’s also that I haven’t taught grown ups well enough (standing quietly while the adults are talking 😉 ) I am trying to pay more attention to him while I’m distracted and reward him for standing still for a second and not touching me. It’s an amazingly hard thing to work on.

There is a piece of railroad tie laying near our “arena” I originally wanted to use it as a pedestal but was having trouble getting him to stand on it instead of pawing and rolling it so it has sat there for children to play with. Today we walked over to it. I asked for foot forward when we were close to it. Clicked, rewarded. I placed my foot on it. He looked at me, I could feel him thinking again. He looked at the tie, my foot, me again, then he picked his foot up and placed it on the tie next to mine!!!

After big rewards and lots of loving I tried the other foot. He did the same with his other foot! He is awesome. The whole moving his foot along with mine thing has turned out better than I ever guessed. He already does Spanish walk when I raise my foot. Now we are slowly adding move foot back with mine and maybe cross over? Rusty never ceases to surprise and amaze me.