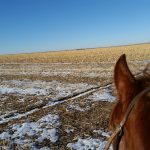 I rode Rusty today. After being in the single digits, or well below for a few days it had warmed up to forty. The snow was melting, the ice was slick and so was the mud. Rusty had had many days off. We didn’t let that stop us. No one ever said I was smart.

As soon as I was settled in the saddle he was pulling towards the corn field. Letting him graze on the left over corn has been a great way to get him wanting to go out for a ride. It gave us a chance to work on whoa and walk. He is picking both up nicely. Out in the field I let him go along, nose to the ground, hunting for corn. For a horse that is so dedicated to the job he sure is bad at it. I would watch an ear appear before us as he sniffed along, and as soon as we got close he’d veer off the other direction. A couple of times he walked right between two ears, searching frantically the whole way. Poor boy.

I decided he had received enough positive reinforcement for the moment and pulled his head up. About that time I heard a distant rumble. Like thunder, or and airplane. Looking up I spotted the small plane flying low in the distance. Flying right at us. My daughter and I had met one similarly last summer and out two good older seasoned horses didn’t even flinch. Crop dusters fly over the place regularly at much lower and more acrobatic levels. But knowing it will probably be fine and sitting on an energetic, some times spooky, young horse are two different things. I settled deep into the saddle and waited. Rusty pawed his impatience at standing still. The plane flew right over our heads. I could read the numbers on the side of the little red and white two seater. I clicked when he was right over and gave Rusty a cookie. Rusty wasn’t sure what it was for, but he ate it happily asking if we could please move now?!

I let him go breathing a big sigh of relief as the plane flew off over the cattle and into the distance.

We got back to work. He wanted to trot so I let him go. The footing wasn’t as bad as I would have guessed and we did a circle or two. He really wanted to go so I sat and pushed and he gave a stunningly gorgeous canter transition. Leaping into it without taking off. I clicked him and he stopped to eat. We meandered about a little but before to long I heard another tell tale rumble. Looking up I saw another plane coming! I wasn’t as worried this time and got my phone out. Between my sunglasses and the small phone screen I couldn’t tell if I was getting the plane or not but if we were going to get buzzed twice in one ride I was going to get video of it! 😉

This one stayed farther away and was much less impressive but still made me proud of my pony.

He was still bursting with energy so we trotted, we practiced some vague and barely remembered dressage test. Then we tried for more cantering. He gave e that beautiful leaping departure again, then ducked his head and got really round. Fortunately he’s not good at bucking, I’m sure it would have looked even more pitiful than it felt. I didn’t fall off and instead pulled his head up and we stopped.

After a few more trot circles I wanted to try one more time so I asked and at a slight push from the hips he went. A far cry from our pitiful, fast trotting, enthusiastic kicking attempts in the arena. Neck arched, snorting, and leaping he cantered around our circle. Noisy and animated, and quite beautiful from where I sat until I sat and he stopped. I rewarded him and we started to work our way home.

Once there I began our work on gates and was brutally reminded of all the things we haven’t worked on.

One thought on “Flying High”