A friend of mine told me she was taking her dog for a lesson. I could come along if I wanted. The guy does some of that clicker training stuff.

She caught me there. I had to know who she was going to see. Some guy out of Scottsbluff. I follow a guy who trains dogs out of Scottsbluff, could it be the same guy? It was!! It was Jeffrey from Bangarang Bow Wows. How exciting.

Her dog is adorable. He’s sweet, well behaved, and beautiful. I couldn’t imagine why she was looking for a trainer. Much less a clicker trainer. That’s my thing. She thinks I’m weird, in the kindest way possible I’m sure. Her wonderful dog is sweet and submissive, very submissive, too much so. He listens but he also cowers. I understand fully how unbearable that is. Our practically perfect Daisy does the same thing and I can not stand it. I don’t know what her life was like before we got her. It’s possible that she was handled more harshly than she could take, or it’s possible that, like my friends dog, she never had a hand raised to her, she is just too sensitive to handle life. My friend is fully committed to her dog and needs to find a way to fix this.

So, she went looking for a trainer. I had never recommended this guy because he’s a clicker trainer and we are too weird for her. She doesn’t have a problem with it. Just not her thing. She stumbled on him on her own and was going down to see how it went. It’s a good two hour drive from here. Most things are, we like being in the middle of nowhere. Her dog rode wonderfully, but nervously, in the back of the Suburban the whole way.

The guys training facilities were in an interesting neighborhood. We were glad that the lesson had gotten moved up from evening to mid afternoon. I teased her a bit about her plan to drive clear down here by herself to meet some strange guy she had met online, at night, in the town version of the middle of nowhere.

He looked just like he does online. We were able to recognize him right away. The dog warmed to him immediately. As she tried to explain the cowering problem her dog happily wandered about, tail wagging, ears up. They decided to put him back in the back of the Suburban. He leaped in happily, then coward. She asked him to laydown and he hunched, not laying, worried about the command, worried about life.

Jeffery stepped in then and went to work. It was so much fun watching someone else doing the same things as  me. Someone with different experiences and training. My clicker training friends are all online, I’ve never met one in person. He did some luring. Got the dogs head down sniffing the treat, then clicked him. The dog was instantly enthralled. He went from cowering to curious.

Once he laid down they stood there talking for awhile. The whole time Jeffrey would randomly say laydown, click and reward. I stood off to the side trying not to say anything. Trying not to say, look! he’s teaching him the meaning of the word! Look what you’re doing! I’ve read about this. I’ve done this. I am going to be doing this with Rusty and laying down pretty soon too.

Then they moved back into the building. I don’t remember everything else that was said or done. There was more work on laying down. Discussion about training theory and technique. The whole time her dog wandered back and forth under their legs, sniffing around, sitting and looking up expectantly, and occasionally laying down. He got a good amount of C/R and seemed thrilled with the whole thing.

It was tons of fun to get to meet another clicker trainer. I would love to go back with her to watch again. I joked a little about bringing a horse sometime. He did have a video up awhile back, apparently too long ago for me to find it quickly, of him working with a horse on targeting. I suppose the parking lot there could work for an arena, we’re used to using our driveway for and arena 😉   The real training for them will start next time, this was a meet and greet. Otherwise known as a consultation. I can’t wait to see how the two of them do. I hope that she gets sucked into the whole thing as bad as I have. 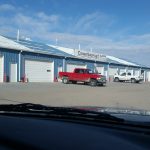 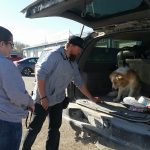 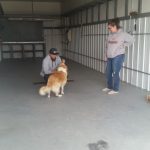 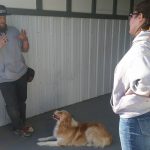 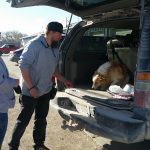 One thought on “It’s For The Dogs”