I believe I’ve mentioned a few times that we are calving. I ride Rusty out to check them when ever I can. A four-wheeler works better when small children are along and goes a little faster but isn’t nearly as fun and doesn’t put any training on my horse. It has been amazing to see the effect it has been having on Rusty.

Practice doesn’t make perfect, perfect practice makes perfect. Riding through the cows and just yanking him around wouldn’t accomplish much. But spending the time on him working on refining his responses and teaching him to be calm and relaxed out and about amidst the cows, going up and down hills, braving the weather; it’s starting to make him into a decent horse. He still isn’t getting the time I would like but it’s better than nothing.

We topped the biggest hill in the pasture the other day, the wind was blowing, the sky was spitting rain, Rusty ducked his head and went into it. I clicked him at the top, just for being such a good boy, and we paused to eat a cookie and admire the view. The sky was a patchwork of dark and light, stormy clouds juxtaposed against bright sunlight. I scanned the fields looking for cows in the far corners of the field hoping to cut the ride a bit shorter. I scratched his neck and told him what a very good boy he was. Only the week before we had pranced nervously through this very spot, now he stood clam and relaxed. We walked on down the other side.

At the base of the hill he lost it, prancing and determined to head home. I let him trot and them lope circles, stopping when ever he wanted but turning him into a circle again as soon as he started jigging. It was kind of a hairy spot to be doing circles, between holes, grease like cow poop, and a line of silage where the cattle had been fed. As he slowed and was willing to walk again we started finding carrots strewn across the ground where they had bounced out of my pockets. He learned quickly to reach down and search the ground after being clicked to find those escapee carrots.

Through the terrifying tunnel of doom, known to some as the gate between the pasture and the corn field, and out into the stalks we went only a bit nervous. Through the wheat stubble we stopped to play find the calf. It’s amazing how they can disappear as soon as they lay down. Then across the corn. From the hill above I had seen a cow out there that I wanted to check. As we came out of the wheat he asked to go. With the long open expanse ahead of us I didn’t stop him.

He lunged into a gallop and we shot across the field. I fought the urge to tighten the reins and let him go. He slowed from a headlong gallop and settled into a traveling gait. He leaped the pivot tracks and stayed on his feet through the rough, jagged stubble. Clear across the pivot he went and was happy to stop at the other side. Then we turned around and walked blowing hard back to the cow we needed to check back towards the middle of the field.

The next day I rode him out again. We followed the same rout. Except coming into the corn field. Instead of cutting across the middle I steered him around the edge where the path was flat and smooth. Asking for a haunches in, something we haven’t worked on yet, he gave me the proper lead anyway. I urged him into a nice, easy, slow lope. With every stride he said hey, lets stop now? I said are you sure? How about we go a little farther, remember you wanted to run yesterday. Not today, he said, today how about we walk? And so we did. 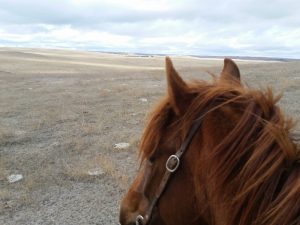 On top of the hill 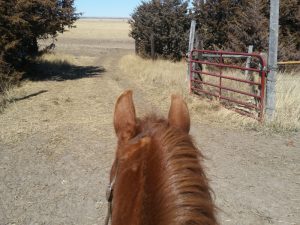 The tunnel of doom 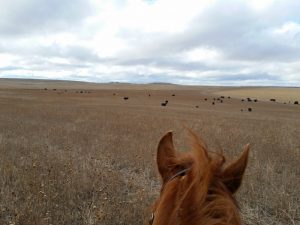 Across the wheat stubble 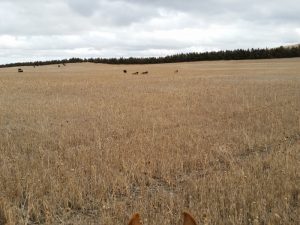 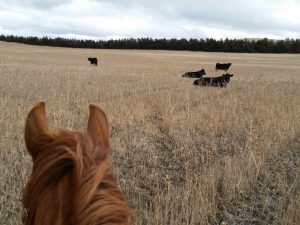 I don’t see one in there 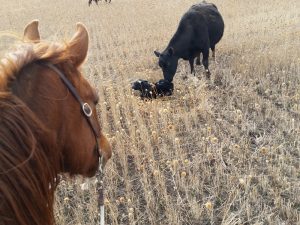 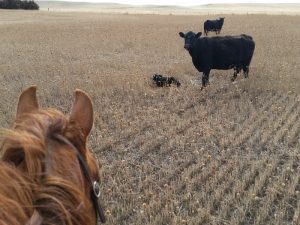 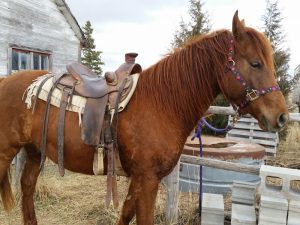 One thought on “How A Good Horse Is Made”