This is such an exciting day. Harvey and Amarillo are going to be here tonight! Baring any major complications, and that would be awful. I can’t help but think about and compare this to the day that Rusty finally arrived.

All three horses are, or were, fosters for Forever Morgans. Rusty I did not need, we had three horses already and that is our magic number. But, although they were all perfect wonderful horses, non of them where what I needed. I was desperately missing a horse for me. Coyote is my baby, has been for almost twenty years now. But he is older and already trained.He is not interested in learning new things, he’s already wonderful the way he is. I wanted a baby to start. He turned out to be perfect for me.

With these two the story was slightly different. We lost the perfect and wonderful Princess Onna and needed a new horse for my daughter. Coyote may end up filling that roll although I had already declared him to be my sons. Coyote hates showing though and even if he’s doing a great job around home I don’t know that she’ll be able to handle him by herself in public for quite a few years yet.

I searched through Forever Morgans and Morgan Safenet’s lists of horses available. There were some that looked good but I never got a reply. I looked online for horses for sale near us that would fit the bill. Nothing was perfect, everything was too far away. I looked back through Forever Morgans lists of horses needing homes, again. Harvey had been catching my eye ever since he showed up there. His description broke my heart and made me want to work with him.  “He does ride. He is hard to catch but is good once haltered. He is afraid of people and shakes when they come near – this poor boy needs someone with patience and love who can teach him how to trust again and that not all humans will do to him what clearly was done in the past.” How could anyone not want to fix that. He wasn’t what we needed, but maybe he could be a short term horse.

Without Princess Onna we had room for another. I could take advantage of this opening to bring him home, get him going, and find him a home. Maybe in the mean time the horse that we needed would show up. As with Rusty finding shipping took what seemed like forever. They asked if there was any chance I could take two horses instead? It would be easier to find shipping and his buddy could stay with him. I am not the one who gets to decide these things. My father -in-law is the one who feeds them. I told them I would ask and see.

In the meantime I looked back at the other horse they wanted to send. Amarillo sounded pretty good. I wasn’t entirely sure why he wasn’t the one I had asked about in the first place. “Amarillo is good to handle. He leads like a gentlemen. Good for the farrier. Good on cross ties and for grooming. Amarillo is pretty laid back. Amarillo can sometimes be hard to catch. But come armed with treats and he is in your pocket.” Plus he rides and is a pretty colored buckskin. Maybe my daughter will love him.

Now they are almost here. The lady hauling them has been wonderful, letting me know what’s going on and sending pictures. Her pictures are far more boring than Rusty’s pictures were. He came over mountains and through blizzards. The pictures I got were of a green baby grazing at a rest stop along the interstate, semis in ditches, I was fascinated and terrified. Now I am getting pictures of horses standing quietly in a trailer with full hay nets. Much more boring. Not a bad thing at all. 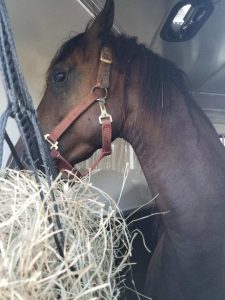 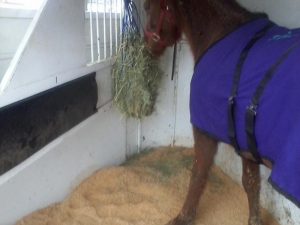 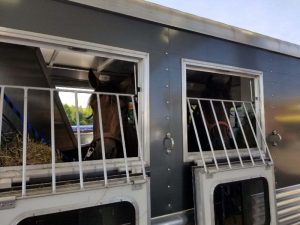 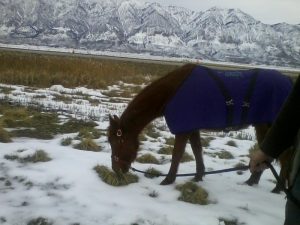 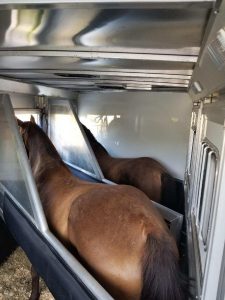 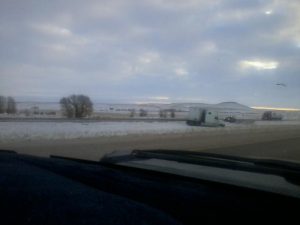