We got to drive clear down to Scottsbluff yesterday to meet with some other clicker trainers. We are very lucky to have others so close who enjoy this rather obscure method of training. By close I mean within a few hours. It’s all relative. A couple hours is closer than the other side of the world.

The morning started out with dogs. We got to see some big beautiful pit bulls in action. They were well socialized, had excellent manners, and very good training. Jeffery talked about how the younger one would be classified as a dominant dog in more traditional circles. He barked a lot and was more physical with other dogs. When really it was all signs of insecurity. Then he brought out his older dog who was very quiet and patient with the puppy bouncing around his feet and face. This one was the real boss. He was very confident and didn’t need to show anyone he was tough.

The bouncing puppy was very reactive and spent the beginning of the day barking incessantly and pulling constantly, front legs off the ground, at the end of his leash. In a very off hand manner, Jeffery tossed them a harness to try as he continued to work with his big dogs. After the tack switch the puppy almost immediately stopped barking. Not completely, there were still lots of dogs, and new people, and things to bark at. But the barking only erupted occasionally when a new dog was introduced or something set him off instead of constant.

We discussed and demonstrated TAG teaching over lunch. And did some outright clicker training of people while we were at it. It was lots of fun watching a persons mind work as they tried to figure out what was being asked of them. It was also fun watching the “trainer” try to figure out how to thin slice it and how to give cues.

After lunch it was on to horses. Rusty and I got to go first. It was different talking to a group of horse people who knew what we were talking about than school children who know basic normal horsemanship st most. We got to discuss the things we were doing. And they were very understanding when Rusty couldn’t resist eating the green grass instead of handing me my hat.

Then Kyler showed us how he has been working with the flashy little Shetland he is training. They have been using clicker training to help her calm down and focus as well as to get her to move forward calmly. She was a wonderful example both of a reactive hot horse being calmed by clicker training and of how it is a safe method for children to train and work with horses. They gave a great showing.

During Kylers demonstration and Berns afterwards, everyone wanted to borrow Rusty’s toys! This is one of the few groups of horse people where a rubber chicken, a bouncy ball, and a trampoline are sought after horse training tools! I loved the way they got passed around, not only by the children playing happily on the sidelines but by the trainers working with their horses.

Last, but certainly not least, Bern brought out his pretty Appaloosa mare. They have been working hard on laying down on cue and even though she didn’t lay down there on the grass in front of our shade tree we were unwilling to leave it was nice to see the obvious training and time he had put into her. The showed how to start a horse on clicker training using a target, a cone in this case. Then he gave an example of transferring targeting, or touch, to another object. Rusty’s bouncy ball in this case. That turned into a demo on teaching a horse to pick something up. They came really close to getting it in one session.

Then it was time to go home. It was a fun, informative day talking to clicker trainers in person, for once, instead of online. Everybody has so much knowledge and so many things to learn from them all. The things that stood out the most though were the change of collar on the puppy and the amazing effect it had. The children. They were everywhere. It was wonderful to have kids involved, both training and watching, and to be doing a type of training that is, for the most part, safe to do with small children in close proximity. We discussed how I can train on Rusty with my kids underfoot. Kyler demonstrated how it can be applied safely by a kid without the bucking and running often involved in traditional styles of colt starting. I can’t wait to do it again! 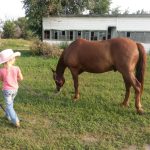 Getting ready to go 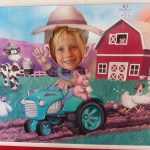 Did I mention it was held at 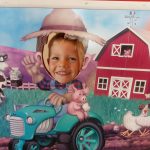 The Legacy of The Plains Museum. Great place. 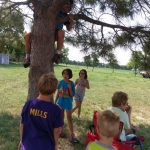 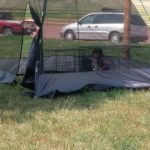 I should mention she put herself in there, and out of there. 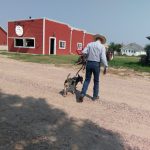 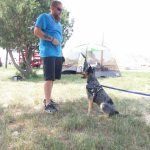 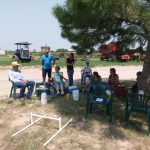 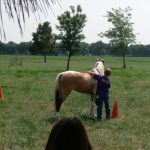 A boy and his pony 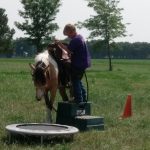 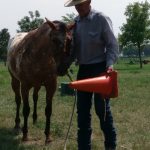 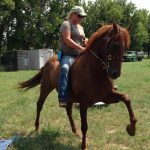 And one of me!

One thought on “Clicking Clinic.”