As in we actually went on one today! There’s a little country church not far from us. We really like it, not sure why we don’t go there more often. Except the lack of children’s church, that’s a big one. And no restaurants between there and home. I admit a big plus of going to church is eating out afterwards. But I digress. They had a trail ride! We try to support them when we can and it sounded like lots of fun, so we went.

The day started out foggy and cold. Not just a little fog but a thick, sunny, dark, glorious fog! It cleared though and warmed up. Perfect weather for a ride.

There were more people there than I had expected. A nice little crowd. It was more horses than Rusty had ever seen in his life. He came with to Fort Rob for the Morgan ride but I rode Gypsy the very nearly perfect Arab cross instead of him for the group ride. She was here too of course with her little people on board. Rusty wasn’t crazed at least. And the hills weren’t as big, that helped although whether it helped me or him more I’m not sure 😉 We walked a few laps up and down the road in front of the church. Then my daughter got on and we made more laps until it was time to go.

A little ways down the gravel then we turned in to someones pasture. Behind us followed a pickup pulling a trailer with hay and the non riders of the group. Rusty was nervous. Wanting to trot. Or stop and look around. Coyote was perfect. He and his little person followed happily. The pickup careful picked its way through the hills and ruts as the horses tried to remember that it couldn’t go everywhere they could. At the top of a particularly large hill we stopped and switched riders on Coyote.

Gypsy got switched to her other bigger person. She had been ponied until then, now they were turned loose. The two of them zoomed all around. He’s a wonderful little rider blessed with a great horse. My son didn’t do as well although Coyote was still trying to be perfect. Rusty had an obvious problem although at first I couldn’t tell if it was nerves or what. Finally he started kicking out with one hind leg and I decided to hop off and see what was wrong. It turned into a bit of a leap as he jumped kicking enthusiastically on my way down. He had a whole ball of cactus in his heel. Poor baby. No wonder he was upset. I managed to get them out. They left blood. He felt mostly better after that. My son was not having fun. Rusty wanted to trot. Or stop. I made him wait until we got to the bottom of the hill we were going down then let him off.

My daughter was having fun on the hay wagon with her friends and didn’t want to get back on. I was dreading the thought of having to keep Rusty calm and make it back alive while ponying Coyote still. Luckily I was able to convince my husband to abandon the children and join me for a ride. It was wonderful! We haven’t ridden together since before our first child was born. He did great on Coyote and Coyote did great with him. We zipped back to the church as fast as two Morgans can walk. A hard thing to do while trying to follow the group leader. Oops.

At the church we were treated to hot dogs and s’mores around a campfire followed by music. The children ran off to play and we sat, relaxing by the fire in the coming evenings chill. The horses pawing in the trailer kept beat to old John Denver songs and gospel. The whole afternoon came together to be the best church service ever. 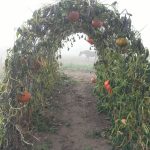 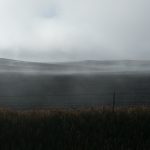 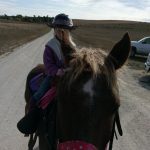 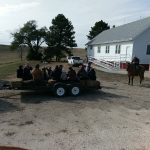 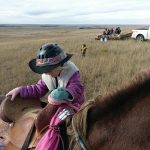 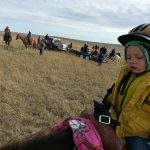 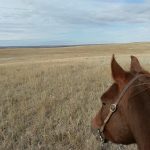 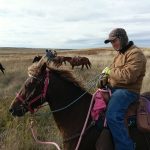 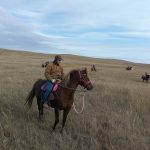 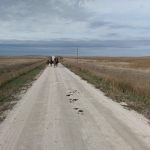 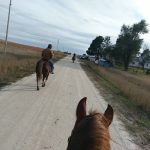 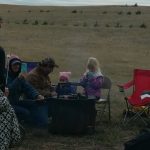