I am a trainer. It’s what I do and what I love. Everything I do is some how related, or I should say I manage to find some way to relate all of life to training and find a way to make a connection.

Once I realized that a calf learning to nurse is basic reward based training it opened up a whole new realization for me. If getting a calf to nurse is just training then we can apply training principles to it and teach the calf. There is no need for fighting and complaining that the calf is just stupid and wants to die. Some parts of that may be true but we can work with those limits.

In clicker training people often write down their goals, write down where they currently are, then make a plan, line out the steps between the two and how they plan to bridge the gap. A training plan to be exact. I have never been good at that. Not at sticking to the plan at least. Things come up along the way. What ever we happen to be training reacts in an unexpected way, new opportunities come up in the form of an offered behavior that is too good to pass up just because it wasn’t the original goal.

I usually fly by the seat of my pants and even with an end goal that stays the same our path getting there is long and twisty.

Today I made a training plan.

Is it a good one that will actually work? That remains to be seen. It isn’t a long complicated one. It’s only going one day out, one lesson long. Not entirely sure that even counts.

We took the calf a bottle today. I was going to run the poor cow back in the chute again but when I opened the gate to start she had a melt down. I couldn’t force her. The calf wont nurse out in the pen. She might stand for it but with anyone there watching she starts pawing and stomping and generally having a fit. The calf can’t get to her even if it is trying. I had hoped the bottle out in the pen would show the calf that she could eat there too. The calf was thrilled with her bottle and sucked it dry. Whether anything was learned is hard to say.

I should probably mention that the calf is a heifer calf. I thought I had seen bot parts. I was wrong. It is very much a girl. She was named Blossom tonight by the children that came along to help feed her. From now on I will call her that to make life easier.

After Blossom finished the bottle she really wanted more. She followed the kids around trying to suck on their coats or faces or anything she could reach. After watching that for a minute it occurred to me that making use of her whetted enthusiasm to get her working on the cow would be a good idea. I quickly chased them out and let the cow back in.

Blossom went to searching, all along the cows front leg  :/

The cow started pawing and stomping. And kicked Blossom when she got close. I left but not in time. Blossom was thoroughly discouraged.

So I made a plan. Tomorrow we will take her another bottle. After she finishes the bottle and is searching for more I’ll turn the cow back in. She’ll be upset about us and life in general but if I have her hay ready for her maybe it will distract her enough that she wont stand around and be mad about us? It’s not much of a plan but it’s the only thing I can think of.

Here’s a picture of the cutest calf ever to go with it. Just because it’s cute! 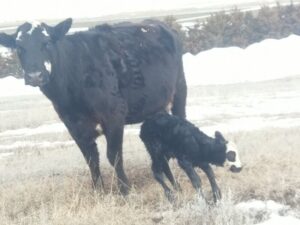