The storm has passed. The sun is shinning. The wind has slowed, a little. Now the guys are out in the big tractors trying to dig their way in to feed cattle and clear the drive so we can get out again. The calves are stretched out on the soft warm hay sleeping in the sun. The horses stand hind leg cocked, heads hanging, as they rest and soak in the warmth. We made it through another one.
This one was long lived at two full days and colder than the last two have been. Still it was a spring storm so the snow was melting underneath as it came down. Icicles formed on everything, blowing sideways as they melted and froze.
We got somewhere around two feet of snow, more than the last one that gave us about a foot of heavy wet straight down snow that blanketed everything and provided good moisture because it didn’t all end up in drifts. Less than the big one that buried our whole world in.
My husband and I hiked out yesterday afternoon to check cows. I had tried to get out there on a fourwheeler but the lane was drifted full and there would be no getting down that without some serious digging. The drive back from the failed attempt was nearly impossible. Driving straight into the wind with snow striking like bullets to my face and eyes. Each pellet burned and stung making sight nearly impossible. I tried to steer by watching the tracks on the ground from the trip out. They were becoming almost invisible, covered already by blowing snow. A good example of the difference a windbreak makes.
Walking was preferable. We stayed next to the trees row, taking advantage of their shelter. The biggest drifts were avoidable. The ones that weren’t we waded through above our knees.
The cows looked mostly comfortable pressed against the drifts that were now forming windbreaks themselves. They ate or slept or called for calves that were too busy playing with friends to listen. No calves born that we could find, we are in a bit of a lull before the late calvers start. Cows will hold off in that weather, when they can. The wind was blocked but snow fell like mist around us.
Coming back we paused to listen to the birds singing in the trees and to say hi to Poppy. 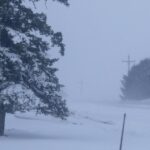 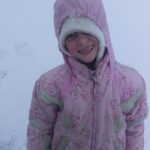 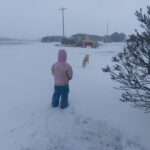 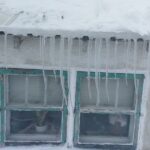 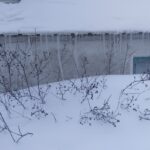 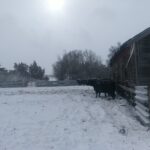 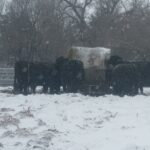 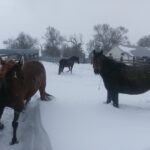 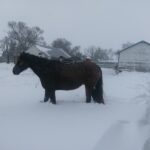 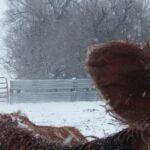 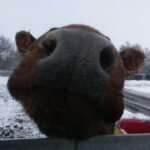 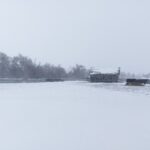 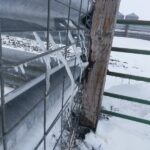 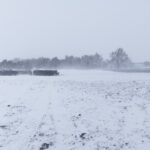 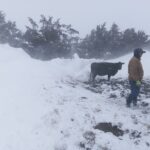 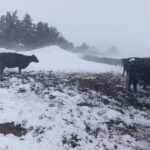 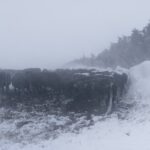 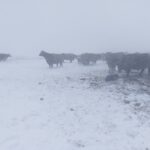 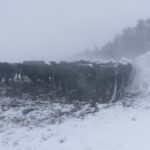 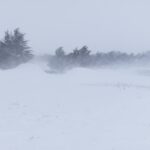 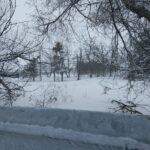 One thought on “In The Middle Of Things”