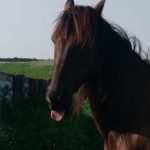 It’s official now and time to make the announcement.

We’ve loved him since he first got here as a foster horse but always planned for him to find his own home some day when the right person came along.
Then a person came along. She might have been a great one for him. I was sad, but fully intended to do what we had planned all along and let him go to her if it was right. I hated to see him go and spent a fair bit of time praying for it to turn out for the best, whatever that may be.
Then I looked him deep in the eyes one day and realized that I couldn’t do it. I couldn’t let him go.
I got a hold of Forever Morgans and told them that I wanted Harvey! We’ve finally gotten all the paperwork done and he’s really mine.

Harvey arrived here a little short of a year ago. He was no longer terrified of people, like he had been when Forever Morgans first picked him up, but still didn’t want much to do with us. The terrible pin firing on his legs tells a story on its own of a hard life and reason to fear. The lady who delivered him was horrified that I was going to turn him out without a halter on so I could catch him again.
I turned him out without and didn’t even try to catch him for a good month.
Then we started over. He was supposed to know how to ride and drive. I didn’t want to ride or drive him following the path that lead him to such fear and distaste for people. I wanted him to like to work with me.
We’ve done lots of ground work, lots of trick training, and a little bit of riding. Harvey is a quick and enthusiastic learner. He may like to be all spooky and silly sometimes but he seldom balks at anything I ask.
That makes him a perfect demo horse for The Horse Tricks Academy (https://horsetricks101.mykajabi.com/horse-tricks-academy). He has been working hard learning new tricks and showing others how to do them too.
Because of that, and because we at the Academy feel strongly about helping horses in need, we are donating a one year membership in The Academy to Forever Morgans in his name. As soon as they decide how exactly they are going to use it I will let everyone know!

One thought on “Harvey Is Ours”