It’s been a few years now. I think it’s time for me to share the story of where Rusty came from again.

I did NOT need another horse. I had two very small children. A small bunch of horses that was perfect for us, older and experienced. I was bored sick. I wanted a horse for me. A young one that I could train on. I was complaining to my mom about it. After I went on for awhile she said there was one that she hadn’t been going to mention to me but maybe I should take a look.
He was on the Forever Morgans Facebook page, he needed pulled NOW. Today. On Halloween. He came with warnings about his behavior and lack of manners, to go to an experienced home only! There were lots of offers to take him, offers to foster and to adopt. How could there not be? He was in that young ugly duckling stage and a plain boring sorrel but his bloodlines were great and even as an  ugly baby he showed promise.

“URGENT!!!!!!! …Foster home needed immediately!!!!!!!!!!!!!!!!! We can’t pull him unless he has a place to go with people who understand he needs training. This horse has ONLY TODAY. If we are going to pull him we need a place NOW. “Rusty” 3 year old reg. Morgan gelding… He is in Washington State. $375.00
Rusty needs someone experienced in handling a young horse who has limited manners. He has a habit of running over people, and showing no understanding of personal human …space. That said, he is young, and young horses can be pushy if not taught to understand these things. We are recommending him only for someone who feels comfortable with a horse that needs this sort of training. We are looking for a foster who is willing and ready to help Rusty with his manners which is an important step in his finding a forever home. PLEASE consider helping him – and, again, he has only today. This is a dire situation.” 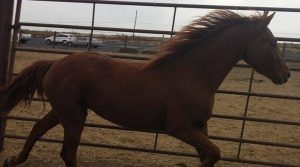 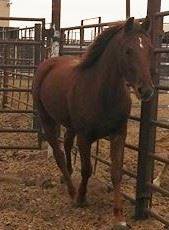 I talked to my husband, figured it would never happen  so there was nothing to worry about and said I’d foster if I was approved. I didn’t even start on the paper work until the next day. The approval took forever, they are fully volunteer staffed and do a thorough check to make sure horses don’t end up back in a bad place after being saved once, I’m not complaining, just saying. All the other offers disappeared somehow. They finally called to say he’d be coming here!

I hadn’t really thought I’d end up with him. It was still exciting. We waited for hi to get here. He was on the west coast. It was winter time. Finding a hauler willing to cross all the mountains in the middle of winter was nearly impossible. Finding a break in the weather once one was willing was just as hard.

He finally got here in January. The people hauling him came through ice and snow, sending me pictures of all the vehicles  in the ditches, but they made it safely.

Once he finally got here Rusty was everything they had said and more. He didn’t move away from pressure, he didn’t respond to escalating pressure. He stood there and ignored you no matter how hard you applied….   pressure.
He ran me over a couple of times. Smashed right into me if he spooked or wanted by. Round penning didn’t work. He wasn’t afraid, saw no reason to move just because I asked. I didn’t want to beat him, the only thing that he might consider as incentive to move. We started with the simplest of training, taking long walks down  the driveway. He bounced off the end of the lead, drug me along behind him, wore my hands raw. I was so glad I was only fostering and wasn’t stuck with this horse.

I had started young horses for years. I hadn’t thought teaching this one some manners and respect would be a problem. He was wearing me out.

Then I read a blog post about a lady teaching her horse to fetch. I thought Rusty could do that. He bites everything anyway. I talked to the lady who wrote the blog. I googled trick training. I found a group that did that stuff. They also did clicker training.

I wasn’t against that. I had a book I bought years ago and started my way through before that horse got struck by lightening 🙁

We started with fetch. Ooops. Later I went back and worked on manners and things like that but we were goners. No looking back.

Suddenly instead of yanking on  the lead to try to get Rusty to acknowledge me, I was simply clicking when he was in the proper position and he worked hard to stay there. He still has some issues. Behaviors that are so deeply ingrained from birth don’t simply go away. Now though, his complete lack of fear works in our favor. His headstrong confidence and determination allows us to do anything instead of making him impossible to deal with. By working with him instead of trying to force him to conform I have found a brilliant, willing horse who will try to do anything I ask.

He is by far the best trick and treat that I’ve ever gotten  on Halloween. 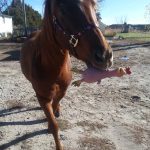 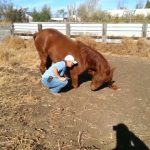 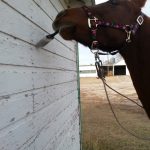 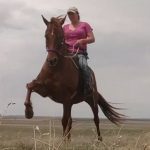 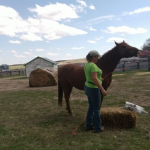 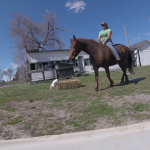