I did that thing that horse people are infamous for. The cardinal sin that everyone knows, or should know, is wrong.

I didn’t mean to do it.  Didn’t even  realize I had until looking back I realized what had happened.

Rusty and I were practicing for our western dressage test. It was our first attempt, the first time i had remembered and gotten  on the ball. The whole thing was very exciting.  I found and chose a test that suited both of us. It was fun and simple,and nothing Rusty wasn’t capable of. Except it called for some stops.

Rusty doesn’t like to stop. he is a very forward hot horse. If he were turned loose he would go all day. Go fast. I rode him in a halter in the beginning then switched to a snaffle when I didn’t like the communication offered by the halter. Then I got my bitless to try out and really liked it so we’ve been riding in that. Because we ride in the bitless doesn’t mean that he’s quieted down any. It only means that he listens to me and does what I ask because he wants to.

When he was plowing through my cues and not stopping I switched back to the snaffle,  to give a little more oomph to my cue when I asked.

It’s a double jointed French link snaffle. Bits don’t get much softer than this. There was no  twisted wire, long shanks, or gags.

That’s why it took me so  long to realize that I had moved to a harsher bit to get training results in stead of TRAINING. A very gentle snaffle that he is used to is still a harsher bit than the bitless, a wide flat rope around his nose with not a drop of leverage. The point isn’t that it’s a soft kind bit. The point and problem is that I put him in it to get him to listen to me better when I pulled on the reins. That I switched to it because he felt dull and unresponsive when I picked up the reins in my usual bit. That I used it to get more response without changing the way I was training.

It’s the trap so many of us fall into. Now I can see how easily it can be done and with the best intentions.

And when I switched? Were the results magically different? Did he suddenly start stopping when asked?

Instead he was stiff. He was no more or less responsive than he had been before. I was more tense and less forgiving because he should know better!

After a couple of days of that I got sick of the communication we had lost somewhere along the way. I was sick of drilling and fighting to get that stop. I said to heck with it. Riding wasn’t fun anymore. If this was what was required to show then we weren’t going to do it.

I put him back in his bitless and got on determined to not be so determined. I wanted to relax and get our mojo back. I wanted the communication and cooperation back. We didn’t stop great. Instead we worked together, got him loose and responding to me again. We worked on all the other parts of training, the listening, from both of us, that leads to a good stop.

Now, having let go of all  of that, we are getting a stop in the bitless again. 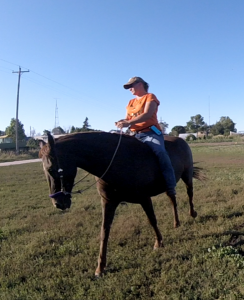 One thought on “Bitless”