It’s still snowing today. The second day of it. Not a blizzard, not for us at least. A decent amount of snow and we can hear the wind howling out there from here behind the safety and protection  of the wind break.

It was time for the kids to get outside.

We went out tromping through the high snow drifts, up to their waists,  and I decided it was story time. They needed to know what to do just in case. It’s one of my favorite stories so I thought I would tell it here too.

Long ago in a land far away, a little over ten years ago and about an hour west, I was working on a ranch. It was high empty country, beautiful and desolate. Nothing to break the wind clear to the Wyoming border. Deep draws where you could look down on the bald eagles nesting high in  the cotton wood trees. Not a drop of water and soil that would only grow good Buffalo grass. Ranch country.

The bad drought of 2006 and ’07 was just breaking, and doing it dramatically. There had been a few grass fires already that spring before the blizzards set in. Nothing was going to burn for a long time after it started snowing. Three weeks in a row, three blizzards to bury the pastures and leave the cows tired and cold. Calving was not going well.

The third blizzard was the worst. The snow a fine mist that got into your lungs making it nearly impossible to breath. It blew through the smallest cracks, filling the barns where we tried to find shelter for the smallest of the calves. The bigger of the calves were tucked away as good as could be up one of the deep draws, lots of hay and as much windbreak as could be found. It was a good place, if they would stay put.

The cows stayed pretty good. They knew better than to wander into the wind. The calves weren’t so smart.

Braving the storm every couple of hours to check them found a calf that had drifted down the draw to where it became shallow as it opened up to the flat open grassland. He was still down in the dry creek bottom but no  longer sheltered at all. Back hunched he stood cold and still, the thought of turning back into that wind to get back to his mom never crossing his mind.

He would need put back.

Leaving the warmth and shelter of the pickup, the wind struck like a whip. Sucking the wind from my lungs and impossible to breath without filling my lungs with snow. Pulling my scarf over my face I made my way down to the calf. He took off. I followed up the other side of the shallow draw following a path trampled firm across an old snow bank. Until he turned.

Once off the old path he was on new snow, light and fluffy. He fell in like if he had stepped onto a lake. Not spending a lot of time thinking at that moment I followed him. As soon as I stepped off the old beaten path I fell in too. Up to my armpits in soft fluffy snow. I was stuck. For a moment I thought I would die there. The soft snow I was in combined with the whirling blowing snow filling my lungs. Drowning on dry ground, I couldn’t breath.

Fighting the panic I got a hold of my scarf and pulled it back over my mouth and drew some grateful breaths. The calf and I sat there eye to eye. Stuck.

I tried to climb out. The calf climbed on top of me. We both sank again. Still stuck. Looking into that calves eyes I thought.

My dad had told us lots of stories growing up of his life running wild along the Platte and Missouri Rivers when he was a child. Quick sand was a constant threat. Never fight it he had always said. If you get in quicksand, swim. Fighting will suck you deeper if you go with it and quietly swim you can swim out like it was water. This snow was the closest I had ever seen to quick sand. No harm in trying. Turning down hill, back towards the blown bare dirt of the draw I pretended it was water and swam. On my belly I didn’t sink, the weight was spread out enough that the snow could hold me. Crawling along I was able to move and slowly but surely made my way to the bottom and firm ground.

The calf had decided I was his friend by then. Amazing how facing life threatening difficulties will bring two strangers together that way 😉 He followed me through that snow. My weight compressed the snow enough that he was able to walk behind me. Stepping on my legs all the way. The calf had decided I was mom and was glued to my side. He followed me as I walked him back up the draw to the rest of the herd. I go to walk with the wind at least beck down to the pickup and back to the house where I was able to warm up for  little bit. Until it was time to go back out again. 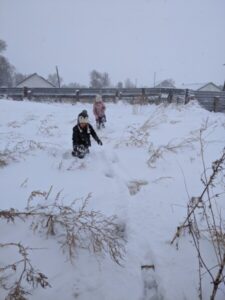 One thought on “Snow Stories”