I saddled Rusty today Planning on a ‘real’ ride.

The kids were busily occupied and I had some time. He has been getting tired  of me riding in  our little arena. Tricks are more fun. He gets to stand around and have food shoveled into his mouth. What’s not to love?

He does seem to enjoy going out and covering country though, instead of the working on  intricate little details that I’ve been wanting to do. He came to the gate as usual but had to stand and think hard about actually coming through it. I thought I’d let him decide what we’d do to start with. He could chose something he liked to do before I asked him to do what I wanted. Once saddled and on I let the reins lay and off he went.

He was going somewhere and in a hurry.

We cut the corner around the trees tight, slipping and sliding on the ice. I was tempted to grab mu reins and steer us to safer footing but then we were through there and there was no point. I thought he was heading for the other horses, but no. We came to them and kept going. That wasn’t where he was headed.
Out to the cattle he sped. Up the lane in  the feedlot.

Now I remembered. We had ridden out here earlier this week. Came to check a tank  that had run over and stopped to share some of the cattle fed while we were here.

Sure enough. He went right to the feed bunk he had enjoyed last time.

When we think about positive reinforcement we usually think about the immediate reward. The click and the treat.

Positive reinforcement is any reward, at any time, that makes a behavior more likely to occur again.

By stopping to enjoy a snack Rusty rewarded himself for riding out there. He wanted to do it again.

When I was in high school my mom  would drop me off at the barn on summer mornings and leave me there to ride all day. Once I rode way down the road to a town with a little grocery store. I tied my horse to the railing at the front entrance and went in. I got a snack for me and a bag of carrots for him. We both enjoyed our treat then rode home.

The next time we rode out he went enthusiastically in that direction. I decided it was because he had enjoyed his carrots. Unfortunately I never put much more deep thought into it. I might have found positive reinforcement much earlier!

What is the point of all that? I’m not entirely sure. Except if your horse is reluctant to leave the barn for trail rides. You might want to consider bringing a snack for him to enjoy at the farthest point.

Mostly though, I think, it’s that positive reinforcement is so much more than a click and a treat. What other ways can we find to encourage the behaviors we want? 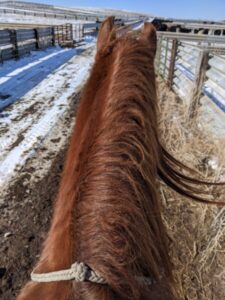