Rusty appears to have foundered Thursday. Although  I guess I should call it laminitis? Apparently it’s considered founder when  it gets to the advanced stages. I’m learning more about this all the time.

He was fine Tuesday when  I worked with him, although he seemed slightly off. Nothing that I could pin point. He wasn’t limping, just wasn’t quite the same as usual. He would occasionally take a step and “ouch” really quick, you know what I mean? He’d pick the foot up like he stepped on something that hurt. Then he would put it somewhere else and walk  off like nothing had happened.

I trimmed his toes a little so he’d have a shorter break-over just in case he was sore. Didn’t touch the sole, just rolled the toe a bit.

Wednesday I didn’t get to see him except for walking past when I went to feed. I didn’t notice anything unusual. The rest of the day I spent inn the house with a sick child. It was miserably cold out.

Thursday when I went to feed Rusty was laying down. Not a big deal but he didn’t get up to come beg for treats. I fought my way past the others and went over to him. He did get up for that but was very reluctant to move. I left him there and went to feed. When I came back by it was immediately apparent something was wrong. Really wrong. He was sitting back on his hind end, front legs out ahead of him, he wouldn’t move and when he did it was painful.

I went in to call the vet.

They said to bring him anytime. That was easier said than done. The pickup on the trailer hadn’t moved since we brought cows home. My father in  law very nicely helped get the battery charger on it and get it going while I got a still sick child bundled up  and ready to go.

Rusty lead reluctantly out the gate. Heildorf followed begging to come out, so I let him. He had no idea what he had volunteered for 😉  They both loaded nicely though.

At the vet Rusty unloaded cautiously and limped around showing them exactly what the problem was. I let him take his time hobbling over to the clinic. The vet  like has moved and I do miss her. This one seems really nice though. I was annoyed by little things but they were mostly silly things. They, the vet and her assistant, wanted to slap him on the butt to make him move faster going into the clinic. I felt he was welcome to take all the time he needed. The assistant wanted to hold onto his halter. Rusty  was standing beautifully. I don’t feel we ever need to hang on  a horses face. It’s her job, I understand, and it wasn’t like she was doing anything bad, I’m just so picky about anyone touching my horses. Especially Rusty.

Aside from those little things they were great.

Of course laminitis was the immediate suspect. There was no obvious cause though. He’s on a dry lot, n the middle of winter, with grass hay. She got the hoof testers out and he didn’t show any reaction to them. At all. Anywhere. He had a slight pulse going to his hooves but not much. He didn’t show any other sign of lameness either though. She checked all down his legs, his shoulders, his back. He seemed fine. except he was so lame he could barely move.

She gave him a shot of the medicine she would give to treat laminitis and esnt home enough to give him through Sunday. If he wasn’t better, she wanted to see hm Monday and would do X-rays.

With that we headed home.
Heildorf had done very nicely in the trailer while we were in and was doing a great job at being along for company. It’s such good experience for him to be hauled all over the place like this being company.

Friday Rusty was doing better, still laying down a lot and still sore, but less so.

Thanks to lots of cookies giving the medicine is no problem. We put a hay bale right next to the water so he doesn’t have to walk hardly at all. The ground is still frozen and rough but we are supposed to have a few warm days here so hopefully that will help soften  it up and make it more comfortable for him.

We have no idea what caused it. He is on grass hay. There was a bale of alfalfa that got put in for them before the last grass bale. That would have been almost two weeks ago though. Surely if there was a problem from the alfalfa it would have showed up sooner? If there was something he got into in  the last bale of grass hay, it is gone now. Hopefully it’s not inn any of the other bales. It can’t be something common because this has never happened before. Not knowing the cause to be able to prevent it inn the future is hard.

He’s not out of the woods yet even though he is looking much better. We will be going back to the vet Monday even if he is looking all right. In the  meantime I need to get to studying about laminitis.

If he gets all the way better and can ride again that would be great. I love to ride him. If he doesn’t and can’t be ridden again, that’s just fine too. We have plenty of things we can do together besides ride. 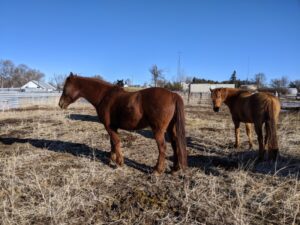