Nate’s history deserves a post all its own. I will barely touch on it here, he was starved, locked in a stall, gelded late, slightly crazy, forgiving, and dependable. That’s the important part. Despite everything he was smart, dependable, and forgiving.

He deserved so much more than the rider I was at the time.  We do the best we can though until we learn better, then we do better.

We were riding up in Wisconsin, the south east corner, in the big beautiful hills covered in trees and under growth. Everything used to be farmed harder than it is now that it is so much a suburb of Chicago and Milwaukee.

As our horses eased down the steep hill, nearly sliding down on their hindquarters, Nate stopped.

Nate sat perfectly still, legs clear up under him, haunches inches from the ground.

All of this happened much faster than it takes to write or read about it. Nate was starting to tremble though with the strain of staying perfectly still.

It didn’t take long for us to discover the source of the problem. An old barbwire and woven wire fence had fallen nearly perpendicular to the ground. All the other horses had walked over it without even knowing it was there. Nate had caught it just right and both hind legs slid under it.

Feeling the wire over his legs, instead of fighting or panicking there on the steep hill likely getting both of us hurt, he had froze refusing to move. I jumped off as fast as I could. Luckily we had wire cutters along. Nate’s hindquarters were visibly shaking by the time we got the wire cut and freed him. He was hesitant to move even when  we had the wires out of the way and he could do so safely. It took some convincing to get that first step.

I believe I walked him down the hill to let him rest and recover.

My hot, slightly crazed little Morgan had saved me once again. Most of my scars and sore places are left overs from him. He was too much horse and I had too little knowledge as a rider. That I am still alive to talk  about it is also mostly because of him. If not for his kindness in taking care of me the wrecks we had could have been far worse. We were friends working together to drive anyone who rode with us crazy, from me teaching him to bite any horse next to us on cue (maybe my actual first use of positive reinforcement?) to him having permission to use me, or anyone else who dared to ride him, as a scratching post (a reward for letting me ride him). Even then it was a two way street of communication between horse and rider.

One of the many horses who I wish I had to do over again. If only I had known then what I know now, of course what I know now is largely because of him. 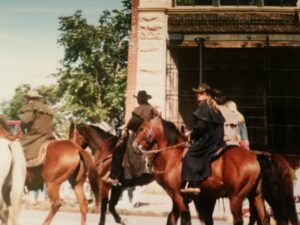 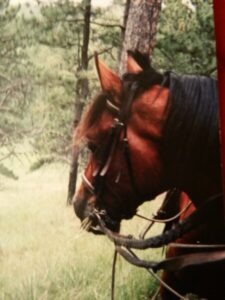 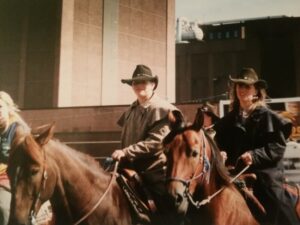 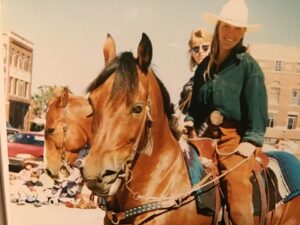