I did get to ride a couple of times and even work cows on Rusty which is always fun. There hasn’t been any training time though. I have to listen to Rusty calling me from their pen,  heartbroken that I am ignoring him.

I see them all as I turn them out to graze and bring them back in so they don’t founder, or decide to graze the in law’s yard. Yes I’m talking about you, Smoke 😝

It should be done now though.

I had planned on dedicating today to getting life back to normal. Washing the growing mountain of clothes gathering in front of the drier. Finishing planting the garden. Cleaning house a little. Paying attention to my children. Silly little things.

The kids were big help occasionally though. They’re getting so big.

We went over to check the cows and calves that went out to pasture yesterday after we worked them on the hottest day of the year so far. One of those days that leaves your heart pounding in your head and your clothes soaked through with sweat that it is nearly  impossible to drink enough water to replace. They were happy to be out on grass though and everyone looked happy today, making good use of the windmill pond.

After lunch  we went over to check on the yearling heifers, and Poppy, and see how they were doing in their new pasture. They are separate from the rest of the herd so they can be with a bull who has low birth weight EPDs. His babies are supposed to be tiny when born so heifers can have them without trouble, if you’re wondering what that means 😉

Driving out to see them though we found a few places inn the fence where a few posts in a row were broken off and blowing in the wind. Luckily we had a few fence posts and a driver in the bed of the pickup from fixing fence in  the other pasture earlier. We well used those up and had to go for more.

We did finally make it to the cows though.

I had brought my treat bag and a halter. The goal for the day was to remind Ghost that she was tame even though she was out in the pasture. No turning into a feral animal for her!

No  need to have worried though. She wasn’t concerned about running away. She even let my son, who is usually pretty scary, come right up and pet her. She was better about her halter than she had been the last time, a wonderful side effect of training with positive reinforcement.

Poppy didn’t see any reason to get up to eat her cake. It made me wonder if cows can eat new food while they’re chewing their cud? Will things go into the wrong stomach?

Unfortunately we had quite a few posts to replace right after visiting the cows. They followed us along and ‘helped’. They were a bit of a nuisance.

We finished the fence. Refilled our water jug at the windmill, then stopped to wade in the creek a little before heading home. It was another very busy day. Lots of time spent with children! So much for house cleaning though. 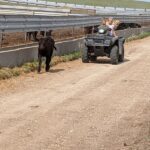 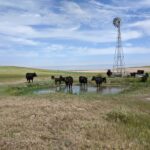 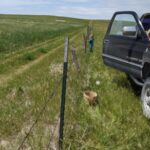 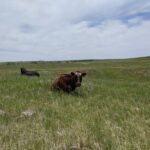 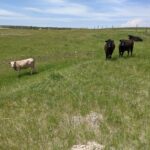 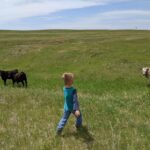 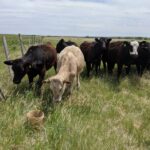 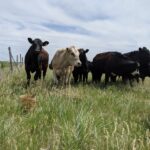 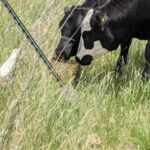 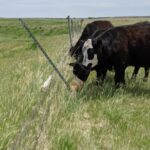 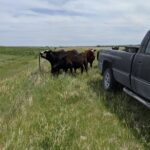 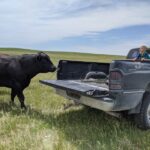 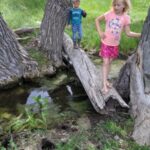 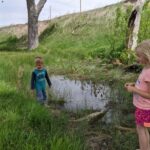 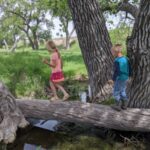 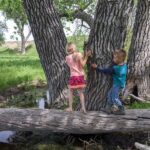