It seems that horse people are constantly trying to control their horses.

The thing is though, the only thing we are ever actually able to have any control over in life is ourselves.

We can control our actions and to some extent our thoughts. That’s the only thing that is actually under our control.

We can attempt to affect the way our horses respond to us. That is not control though.

We don’t actually control things by punishing them. Punishment is a wild card. We may think that by punishing a behavior we have controlled it. That we have made it act the way we want.  In reality though punishment has so many unintended and unexpected consequences that we have no way of knowing for sure what effect the punishment will have.

Usually punishment only has the effect of making things fear us. That is the most dangerous thing we could ever cause to have happen. A scared horse is a dangerous horse.

The greatest way we can gain control is by letting go of it.

Since we actually have no control in the first place and attempting to gain more control often causes only fear and resentment what do we actually have to lose by letting go of control? What if instead of tightening up on the lead and pulling on our horses heads we let go? Not of the rope completely, but let it be loose. Let the horse out to the end of the rope and let him look around. Make a game of seeing if you can avoid putting any pressure on  the lead for a minute? Five minutes? What about an  entire session of working with him?

Reward is not a wild card. With reward we can see exactly what we are rewarding. If we aren’t getting the desired results then we aren’t rewarding the right thing.

Instead of trying to control everything a horse does what if we let them be and reward the things we would like to see more of? By letting go and letting the horse be a horse, by looking for things we like instead of picking on the things we don’t like, instead of control we can gain cooperation, a desire to work together, partnership.

So much more, so much greater than control.

The only hard part is letting go. 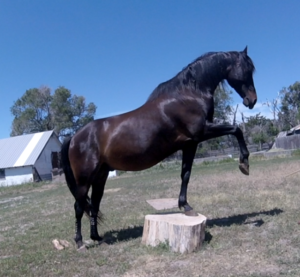