We slept a little late the morning of the fourth. Finishing breakfast about seven thirty the phone rang. It was m father in law, he might need some help. There were cows in the corn.

At first he was telling my daughter this. Hearing parts of the conversation I thought I should maybe get the phone. I had to verify everything. There was no reason  there should be cows anywhere near us. Much less in the corn. Did he mean here or over at the pasture? Where was he?

Coming into the yard apparently.

Yelling at the kids to get dressed we ran out the door. They were in the in laws yard heading for the garden.

My husband went running to save his garden. I ran to open gates into the corrals. By the time I got things arranged the herd was coming around our house headed my way. I made sure they didn’t duck  back through our yard and they were in.

That was exciting. Now to find out who’s cows they were but the excitement was over.

My daughter, who had shoes on and had made it out the door by then, went to let the bottle calves out to their grass for the day. While we were there a ruckus rose from behind us, banging and clattering, metallic shrieks. Looking back towards the corrals we could see the cattle fighting over an automatic waterer. It is an old one, rather fragile and held together with duct tape and a prayer. It stands out from  the fence a couple of feet allowing the cattle to get all the way around it.

It was about to die, a terrible death.

We both ran to save our waterer. Climbing the fence I screamed at the cattle to get. They weren’t budging. I went looking for backup. We both searched for a stick and finally found a sturdy one. Waving it over the fence didn’t budge the cattle any more than my yelling did. The waterer was lurching and screeching as the cattle pushed and shoved fighting to be the one to get a drink.  Any minute it would go over, destroyed beyond repair. I jumped over the fence.

Swinging my sturdy staff I fought the cattle back. Two bulls had their heads in  and would not be moving until t hey had satisfied their thirst. I apologized to the girls, no chivalry here. The boys would not be letting them go first and I cold get the cows to step back. Yelling, wielding my stick, and cussing the cattle in the thick dust they raised, I fought them back from  the tank. Held them to one side so they didn’t topple the poor old girl.

It was a small automatic waterer, there wasn’t much water storage, they were slurping it up as fast as water came in. My daughter stood on the fence behind me, yelling her encouragement. In the midts of the battle I thought how proud I was that she was learning how to wage battle and that she was jumping in. Jumping in every bit as much as I wanted her too. Standing in a fence corner eye to eye with two strange bulls who were tolerating me much like they would a buzzing fly, in with me was the last place I wanted her. I didn’t want to be there either.

My stick was getting shorter and the cows didn’t show any sign of abating their thirst. I was thankful that half of them were trying to  destroy the other waterer they could get to. I could hear banging coming from that way too. That waterer is in a fence line, a fence made of guard rail. It had a better chance of surviving. I couldn’t leave my station. I yelled for my daughter to go try to find her father. I needed back up.

My stick  got shorter as I waited. I hoped not to have to give up my stand. The bulls looked me in the eye saying clear as day that they would not be moving. Cows came and went as others forced their way in. The waterer groaned under the pressure.

There would be no back up. She spotted the guys on the other side of a corn field trying to figure out where these cattle had come from.

I could have told them. All these tags was at eye level with said the name of the owner on them. I wished they would come back. Some cows were backing off but others rushed in to take their place. The dust stung my eyes and chaffed my throat.

Then fourwheelers pulled up. I’d never been so glad to hear them. My husband jumped over the fence to join me. I needed to get them pushed out of here, he said. No kidding, I said, I can’t…

He walked towards them and the herd left.

I hadn’t hated him so much since the semi incident. Shifting into low range is hard to remember 😉

The tank was out of immediate danger. The other tank was in greater danger now. This was one thirsty herd of cattle.

We began to revise our theories as to why this herd had shown up. They were obviously looking for a drink.

We got them pushed out to a pen with a big tank instead of these automatic waterers. They could drink their fill without destroying anything. Time to look for owners.

After much calling around they were located, at the lake for the weekend. They’d see if they could find someone to come get their cattle. When someone did arrive my son was out helping his father fix a pivot, I drug my daughter along to help get the cattle out of the corrals. She was great help opening gates and even bravely holding the opening we didn’t want the cattle to go down. Seeing her standing her ground in the wind and dust, arms waving yelling at those cattle, I was so proud of her. Such a fierce little thing.

The cattle headed home. The owners swore the water had been checked a day and a half ago. The windmill must have broke down immediately after. Not a terrible amount of time for the cattle to be without water. Long enough for them to break through fences and go searching for a drink, especially in hundred degree weather. The most damage done was to the corn field they had been found in, the garden and the tanks had been saved. The town fire department was on their way to fill the cattle’s tanks with thousands of gallons of water.Hopefully they can get the windmill fixed soon and check their herd more often! 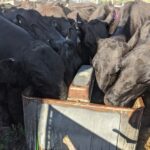 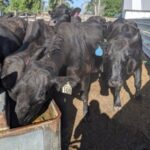 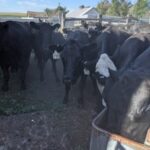