I know all the rules of the training, I know positive reinforcement is effective, I know it works.

We needed something done RIGHT NOW though. There wasn’t time to  train. It would be easiest and kindest to both animals to just get the job done and over with.

Our goat had her baby. We had nearly given up on her. The people who bred her for us said their ram had a fifty percent calf crop this last time, whatever the proper goat term for that is, a fifty percent kid crop? There was a good chance ours hadn’t bred. She was looking pretty fat and her bag was getting bigger. I held out hope. Yesterday she went into labor. Moaning and groaning she began digging nest holes. Weirdest thing I’d seen. Who’s ever heard of a goat making a nest?!

By evening still no kid, we locked her in the barn for the night in hope of warmth and easy checking.

By morning there was a beautiful white female kid. Our goat, Baa’s bag isn’t great though. We would need to offer lots of help so she could figure out how to nurse and get started at it. Milking Baa and offering the kid a bottle would be a good place to start.

The children named her Violet. I wasn’t sure if it was an improvement or a disappointment after the last one. Snow White Tractor is a name for any goat to live up to 😉

Baa is only partly feral. She will eat out of our hands and is calm to handle but not halter trained or trained to let us milk her. We put a halter on her, snubbed her off to a post and my husband held her while I milked.

I milked her a few years ago when she had her last kid. She wasn’t bad, not great but just kicking my bucket, not fighting. This time she was having none of it. We needed milk for her kid though so we held her and fought and got the job  done.

It wasn’t easy and I wasn’t looking forward to doing this a few times a day until the kid figured out how to do this on her own.

I went out a couple of hours later with some of the milk in a bottle to feed Violet. I brought treats along as a peace offering to Baa. She came right up to take them. Not too mad about the milking then.

I nudged her up to Baa and Baa didn’t take off. Carefully reaching out I gave a tug at her bag. She stood and went back t licking my hands frantically. I gave another squeeze, go a good stream of milk, let her lick my hands.

It finally dawned on me that she was licking the milk off my hands.

By rewarding her with the milk I was able to squeeze out into my cupped hand I was able to refill my bottle for Violet and get a good start at getting the bad side of her bag stripped out. AND get Violet put on her and nursing on her own!

All without anything holding Baa.

The first and most important rule of trainnig with positive reinforcement is that the one being reinforced gets to decide what they find reinforcing. Some people might argue that that’s not the first rule. Whatever. I’m calling it first, they can choose their own. That rule is followed by the reinforcement has to be strong enough to make it valuable enough for them to want to perform the behavior to earn it.

I had offered her treats in our earlier milking. They were not high enough value.

Her own milk that I needed to get out of her for her and Violets well being was a VERY high value reinforcer. Don’t ever let anyone tell you that human adults are the only ones who drink milk. All animals love milk. It’s just a matter of them knowing how to get it. Cows and bulls will often  nurse other cows.

And Baa was happy to do just about anything for a taste of it.

That was the weirdest training session I have ever spent. It was amazing to see how well +R worked with the right reinforcement and how much quicker and easier it was than using force, even  without much prior training. 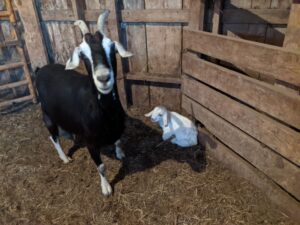 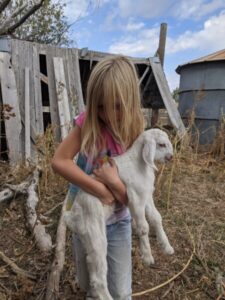