Rusty has progressed to pulling the kids wagon. It works alright. Sufficiently noisy to get him used to almost anything back there. Heavy enough that he can learn to pull a bit of weight.

It was a gift when our daughter was born more than eight years ago though. Beautiful at first it has aged with hard use. And that one time I ran it over with the car. Oops.

Besides, it would be nice to have something I could eventually ride in. I’m considerably bigger than the wagon.

So I mentioned to my husband that I would like a little cart if he knew of anything around that might work. We farm so nothing ever get thrown away. People seem to think that the current generation has invented recycling. They have never looked at the fence rows on farms. Nothing is thrown out, anything that might possibly be reused is carefully saved and used for parts, repairs, new and interesting inventions.

There was one axle and wheels he thought might be good. And they would have been, If I had a team and or heavier harness.

With nothing showing up immediately he decided instead to repair the wagon so it would drive better. The puncture vine around here is nasty stuff and had long since destroyed the inflatable wheels. We were running on flats and one completely blown apart tire.

My husband took the wagon to the shop, pulled off the old wheels and gathered some old wheels off a planter to replace them with. Much wider, heavier, and not going to go flat.

I haven’t had a chance to try it out yet but the kids have taken it and are having a blast ‘driving’ each other around pulling it.

I can’t wait to hitch it up and fully appreciate my awesome husband who does his best to make sure I have everything I could ever need or want and goes about it without my even asking. 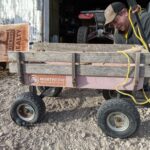 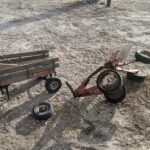 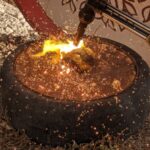 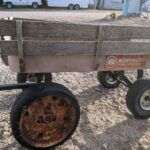 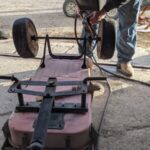 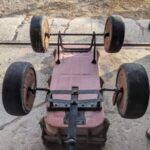 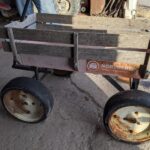 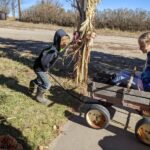 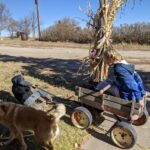 2 thoughts on “A New Wagon”