Reading whorls has been folklore and superstition. But it has been consistent in the different cultures and locals. That is one way we can know there must be something to it.

Everyone has reached the same basic conclusions. Separately.

Buddy Reno commented recently about his experiences involving whorls that he “learned about all the different whorls on the forehead from an old horse trader about 30 yrs ago, and I’ve been shoeing horses for 35 yrs so I’ve had a never ending supply of horses to compare behavior to whorls , I’m a firm believer.”
The conclusions Buddy and his “old horse trader” friend reached are basically the same as the ones I have reached. He also takes into consideration how a horse has been handled because ” how broke they are cause a bad owner can make a good horse bad”.
Once that has been considered though. He says “I’ve found basically, 1 swirl center between the eyes is a horse that is just easy and willing and very competitive because they don’t have any hang ups, they are generally not a hot horse or a lazy horse just solid minded, Now the higher up the face the swirl is then the thinner skinned and flighty they become, then the Lower the swirl goes they start out layed back the that starts turning into stubborn, you can look at a mules swirl and it’s way Down the nose, if there’s 2 swirls then that horse is over reactive , they tend to blow up for no reason and you’ll be standing there saying what the hell was that for, they are quirky, doesn’t mean they can’t make a good horse as long as your aware of how they are, then 3 or more swirls , that horse is a character , busy minded, easy to teach tricks to cause they are usually curious, a line Down the face means a really friendly horse , loves people”
The phrasing and exact ideas may be slightly different but the foundation ideas are the same. As in all things if it was too similar we would have to suspect a shared source. The differences in wording and thoughts actually supports the similarities instead of disproving them.
It’s always fun to compare different peoples ideas. How do you judge whorls? Are there any rules you go by when choosing a horse? 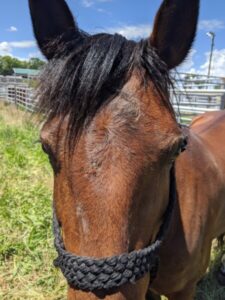