What can the legs of a horse tell us about temperament?
In some cases legs can tell us quite a lot.
When a horse’s ligaments are weak due to hypermobility it gives them a lack of stability. The problem often shows up first in the suspensory ligaments, where it is known as DSLD, but it exists through the ligaments of the entire body.
When a horse feels a lack of balance, strength, and control because of the loose ligaments through their body they become nervous and reactive.
Hypermobility will often present like this horse. The hind pasterns are weak and sinking lower. This has caused what may have already been fairly straight hind legs to become almost completely straight. We can see by the pin firing that there has been lameness along the way. The attempt to treat it was misguided and focusing on the wrong issues. Not that pin firing is effective for anything.
This horse also has a pendulous belly. The loose ligaments, along with poor conformation and bad training, allow it to hang instead of being held up by the muscles as it would be in a ‘normal’ horse.
Horses with weak sunken pasterns will usually have high flashy action which is also a normal accompaniment to a high strung, reactive temperament.
There are so many factors that go into the creation of temperament and personality. Hypermobility can cause what would otherwise be a calm steady horse to become reactive and spooky. Nothing works alone in a horse’s body and the entire picture needs to be taken into account when we look at whorls and all the other ‘tells’ on the outside of a horse that can give us clues to what is going on inside.
horsewhorls.com 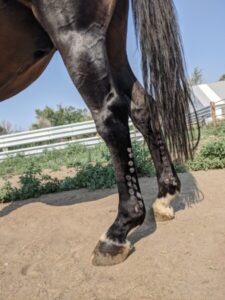