I stopped by to see my friend Verla Schear, of Schear Quarter Horses, the other day. She breeds some very nice horses. This one is not of her breeding but is still a very nice horse. She says he is great fun to ride cutting cattle.

The first thing we noticed looking at him was his perfectly straight profile, steady. The nose bone is pronounced though, determined. His chin has some slight dips and ridges to it for a slightly complicated temperament. At each temple he has small whorls, this shows a horse who is a thinker, extremely smart they spend a lot of time thinking up ways to keep themselves entertained and can often out think their people.

From the front we see a slightly high whorl for some slight extrovert traits, emotional, reactive, sensitive. Most of Verla’s horses had high whorls. Most of her horses are bred to be good cow horses, fast moving and alert. I don’t think it is coincidence that they have whorls that go along with that desired temperament type. He has large well defined brain muscle, it is supposed to show a smart horse, if nothing else it shows a healthy horse  without apparent teeth or jaw issues.

His chest was very interesting. A low zipper whorl. This shows a horse who will work well off the hind quarters, being set low will give an arched neck without being set high. The pectoral whorls are high, almost like a shield, the hair is growing upwards until it reaches mid chest. I don’t know the exact trait that this accompanies.

His flank whorls end fairly high. We can see straight hind legs set well out behind him. A flank whorl that ends high shows a horse who wont reach up under themselves with the hind legs. How does that go with the zipper whorl?That is a very good question.

While looking at the flank whorls I noticed a slightly clubbed hoof behind. Because we had already looked at the rest of his whorls without seeing a reason for this I had to investigate further.

Not being willing to stick my head under the belly of an unknown horse, I stuck my camera under there instead. His belly whorls were very uneven! They were both set right up against the sheath. One of them, the one on his left, is just out on the belly. The other one is actually on the side of the sheath. The belly whorls show where a horse will track with the hind feet. Not very far up underneath himself, which we see also from the flank whorls, and towards the center. I’m not saying that the belly whorls are the cause of the very slight abnormality. They are certainly related though. The hoof doesn’t cause him any trouble and he is completely sound. It sure is an interesting trait to me at least.

All of this combines to make a horse who is reactive and quick to move after a calf, smart enough to think about how he can better be ready for the next move cattle might make, but also steady and dependable. He is Verla’s go to horse for getting work done, steady, dependable, and fun to ride. 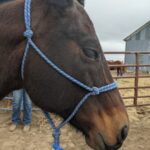 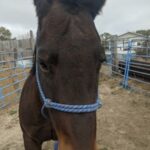 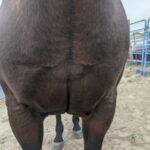 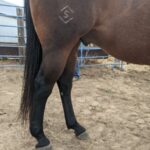 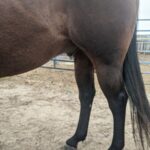 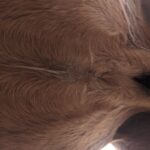