Single whorls have a reputation for showing a quiet, dependable horse. That can be true, but isn’t a rule.

Instead when we see a sing;e center whorl we need to look at the rest of the head for clues to the temperament. Often the heads will show that, a simple, dependable horse, who will be straightforward and steady. Other times I’ve seen single whorls on a head that shows a difficult, complicated horse.

This horse has a single center whorl. So we need to look at the rest of the head.The ears are finely shaped, set wide on the head but very upright. That shows intelligence, sensitivity and energy. The eyes are wide set also, set out on the edges of the head. From that we see intelligence, an ability to learn quickly. Without a picture from the side we can’t tell what the profile looks like and the profile gives us some of the most powerful clues. It does give the impression of being mostly straight, mostly steady. The nostrils are wide open and round, alert, lots of room to take in air. They show a horse who will be alert to stimuli, the big nostrils allow lots of room to take in air. They aid a horse in learning quickly because they wont run out of breath. The jowls, also large, show the same thing.

The whorl on this horse is simple. The rest of the head has so much more to tell us. 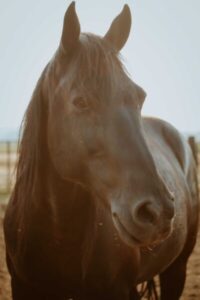