Growing up we were never told that we shouldn’t feed horses.

The lack of formal horse education was a wonderful gift to be given. Without being told all the things we should never do with horses, we didn’t know any better than to just do what worked. We fed our horses treats. Anything they would eat. We might know a little better now and not feed things like baloney sandwiches anymore.  We didn’t know we weren’t supposed to listen to their opinions and had conversations instead of making them respect us.

Not knowing that all these things were even a thing, we were able to form our own ways of communicating and working with horses. We didn’t carry all the baggage to get in the way of our relationships.

As adults, or close to, we were informed of how things were ‘supposed’ to be. But like with adults who were taught the opposite of what we were as children, we already ‘knew’ how horses should be treated and didn’t accept the new information. We kept on keeping on in our own way. The new training was considered and maybe even experimented with. But the old ways were always there, lightly buried and ready to be dug up when it was clear they worked better.

I could never understand why I would ever not give a cookie with the bit. Horses took the bit so much easier. Before I ever heard of positive reinforcement it was plain that if I scratched a horse or gave cookies when they did what I was looking for they understood that they had done good and did it again so much easier.

I was told over and over again that my horse was testing me and didn’t listen as good to me as he did to others. I needed to make him behave! It was clear to me if no one else that he may be rotten, what others considered rotten, I loved his spirit, but he gave me one hundred percent. He would think for himself and do what he decided was best. We didn’t always agree, but I soon found out that his ideas were usually the right ones. He saved us from all sorts of trouble and together we came up with tricks and ideas. Other people would get on and he would plod quietly. Not offering ideas, or giving the help that he did with me. The spark was hid. Waiting until we could get together again and do more.

Sometimes a lack of knowledge can be the greatest aid to learning. We don’t know what can’t or shouldn’t be done, so we do it anyway. 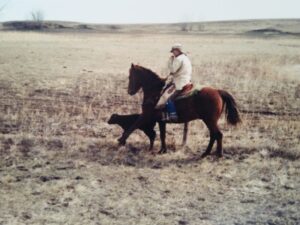