The cows have been locked in the corral for a few weeks now. It isn’t so much that we want them in as that we can’t get them out. The lanes and gates are full with drifts. The fields covered in snow.

I’m ready to get those calves weaned and get the cows out of the corrals!

The end of the drive is still drifted shut. Rusty objected to having to walk through drifts. I urged him on. Once we got to the other side I thought maybe I had worried too much. The corn stalks had caught quite a bit of snow. Each row of stalks was clear down to the ground with eight inches or so in between. The alfalfa was blown mostly clear. It’s so fun to see the effects debre left in fields has. We know it catches snow, how much snow is great to see. I had to listen to people talk all through Christmas about how this snow didn’t do any good. None of it was left on the fields, out in the open. Only places with drifts will get watered by it. I guess it’s easy to say that from a seat inside house or car. Getting out and riding through it gave a wonderful idea of how much this snow helped. Where there was something to catch and hold it.

A herd of fifty plus deer scattered in front of us, before we got close enough to see them good. One must have been sleeping. He popped up right next to us. Pansy briefly gave chase, but thought better of it as the deer quickly outdistanced her.

Rusty was full of himself. Stopping to stare in terror at the deer. Or refusing to hold still so I could get a picture. We pranced and snorted. I let him trot through the deep flat snow for awhile in hopes of using up some of that energy. Between treat bag and pliers it was an interested go. They all bounced around getting into the way. I held onto pliers and reins and tried to keep everything under control. Circling and pawing when I held him back Rusty was having fits. He was ready to go home.

Turning back in the direction of home down the last fence line I was so busy trying to hold it all together that I didn’t realize until we were in the thick of it how bad the snow was getting. Up on top of the hill where the wind should have blown the worst, the drifts were the deepest. it’s amazing how much snow a single barbwire fence will catch. We have a neighbor who pulled out all his old fences, just because he isn’t running livestock on his crop ground. His fields are blown down to dirt where the fences used to be. Instead of covered with good moisture bringing snow like the fields around them.

Rusty was beginning to struggle through the snow. It went quickly from a few deep drifts to deep snow with a few huge drifts. He lunged up onto the top of a drift, it held his weight. I held his mane. We stayed together. Then his front feet broke through. His front end sank out from under me. I went quickly from trying not to get left behind to trying not to get pitched over his head. Fencepliers clanked and treat bag got in te way as I struggled to stay with him and out of his way. He fought his way through the drift to the relatively shallow snow on the other side. I made him stop and take a breather.

Looking around I tried to judge where snow might be shallow. It hadn’t seemed so bad just a brief moment ago. Surely we could get back out of this mess. All around the snow looked the same. Corn stalks peeked out the top of the snow. Or in some places didn’t. Our only option was to keep going. Head for the places that looked slightly more shallow.

I got off to walk.

Together we climbed. Sometimes staying on top for a few steps, then sinking to the ground. Rusty was in a hurry. I was holding him back. If I kept him close it was just asking to get stepped on. If I let him go to the end of the rein he was walking circles around me. If I let him go he’d go right through the fence at the end of the field.

If he could run circles around me he could carry me.

I got back on for the last stretch. He charges ahead. Without any more big drifts we didn’t have any more close calls. Through the wire gate and we were out. It had only been a little under a half mile but it felt like we had run an endurance race. Rusty was lathered. I was panting. The ground was bare beneath us as we left the gate.

There was a big drift up ahead. I was watching it wondering where the best crossing would be when Rusty gave one of those big teeth jolting shakes. As he zipped on I noticed my reins weren’t hanging right. They went straight down. To my bridle he had shaken off his head!

Rushing home, with a very big drift just in front of us, and he had shaken off the bridle.

I pulled back on the reins, knowing it would pull on his neck. We ride with a neck rope sometimes. He knows what it means, if he chooses to acknowledge it. He paused, I gave him a cookie. He accepted it, then was off again before I could be off. I lifted the reins so I had leverage nearer the throatlatch and pulled back again. This time I hopped right off before giving him his cookie for listening.

Already off I stayed off for this drift. It stretched across the road and was as high as his belly at the lowest spot. He lead me again, pulling me along at the end of the rein. It held his weight, except when it didn’t He lunged and sped and we were through it in no time. Now we could take a plowed path the rest of the way home.

He and I were both ready to be done. He was walking his fast Morgan walk and had us there in no time.

Yes, he was able to get through where nothing else could have. Did it mean we should have? Probably not. Had I realized what we were getting into we would have gone around, or turned around and gone back the easy way. Already stuck in a bad spot, he did an amazing job of getting us home safely. He was careful not to step on my legs when they were hidden under all the snow. For all his hot impatience he was still very good. We got the fence checked. A job well done.

Other than a couple of places along the yard it was good. All those deep drifts we struggled through hadn’t covered the wires at all. 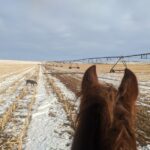 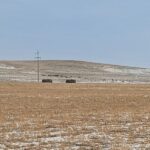 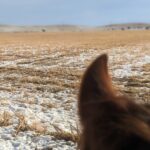 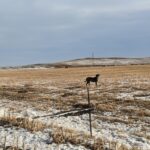 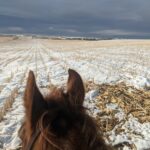 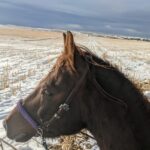 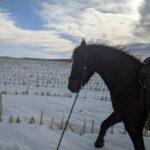 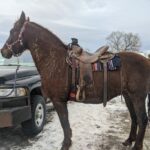