Yeah, no pictures though. Funny thing about the actual training part, there’s no time for picture taking. Plenty of time during the waiting patiently parts and the messing around parts and the getting other people to come play too parts. I did get a few of our very nice walk we took before the sitting on.

It was a great walk. Night and day from what he had been doing. I don’t know if the round pen work helped that much or if it was because we didn’t venture far from his comfort zone. I saddled him and we went out in the driveway behind our house. It’s my unofficial arena, hard as a rock, well graveled, and marginally enclosed, or at least it gives the impression of being surrounded.

We walked and worked on whoa and go and watched chickens flop and squawk and checked out the wagon the kids had left sitting out.  He looked carefully at stuff but didn’t come unglued. I spotted the posts we had used for Tanna’s lesson last time she was out, for side passing down and backing around. I had drug them out of the way against the fence. They would sure be fun to play with but I would have to drag them back out, surely that would scare him to death. So I tried it. He looked hard but didn’t care.

I was thrilled. Leading with one hand I drug the post along side us with the other, letting it back as far as I could. We made a couple of circles then dropped the post and went back for the other on the other side. The we walked over them a few times.

From there I could see the little empty spot thet I had claimed for training grounds with Nev. My tire I had worked so hard to fill with dirt was there and a couple little barrels, all the fun things to play with. Also weeds taller than our heads. If only the weeds were gone it would be so much fun to play over there. So I lead Rusty in to tromp the weeds down a little and sack him out with them at the same time.

He was fine with them. But they were tall and we didn’t venture too far in.

Then we went back to the house to unsaddle and to a convenient gate to get on. I stood on the gate and asked him to step over. I stayed on the same side of the gate as him and, with one foot and a hand on the gate, sat on his back. While I scratched that perfect spot on his neck. He stuck his nose in the air and worked his lips. I patted him and rubbed my legs around on his sides and over his butt. Then turned him loose. 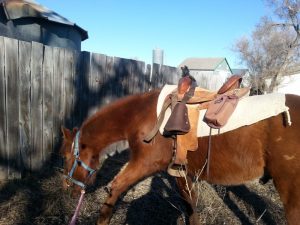 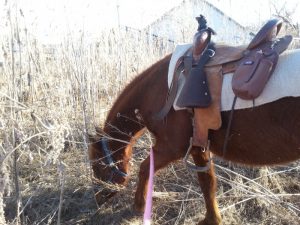 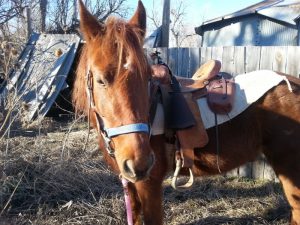