Not that I plan to stop at three or anything but it was my goal. I had a trainer tell me one time that if you are training a horse and can’t get it ridden every day try to get three rides in a row, they’ll remember better that way. Or something like that. Besides I like to have goals.

Drug my hard working husband away from the garden this time to help me. He’s becoming an old pro and is very patient with all my orders, turn right, turn left, circle, bigger circle and so on. My biggest goal was to get Rusty to walk out from my cue not being led. He was not a fan. Then I remembered to click and reward him.

Even being led he did not want to walk away from the direction the other horses were. He would plant his feet and lean back against the pull of the lead rope. That’s when I would start with the orders 🙂 (turn him, circle, not so big, go this way, go that way, poor guy (not poor Rusty)) Then my brain kicked in a little and as soon as he took a couple of steps in the direction we were asking I would click him and we slammed on the brakes and turned for his treat. The next time I asked he went a little easier and even easier the next. Pretty soon he was walking right off to my cluck and squeeze.

We mostly walked around the arena. I tried to walk a couple of circles around my husband, like lunging. That didn’t work so well, Rusty wanted to run over him. Got turns on both quarters good stops and some zigzags so we could practice steering. He was starting to paw, his speak for getting frustrated, so we found a good spot rewarded him big and hopped off.

He did great, again. Hope we can keep up at this pace but I’m not going to fret if I can’t get back on him for a few days. Next time Tanna is over maybe she can ride Coyote and pony/ give us a horse to follow around. 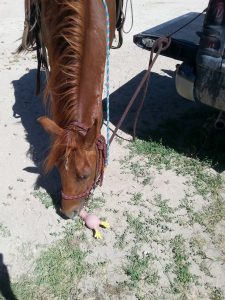 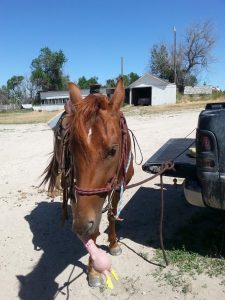 One thought on “Third Times A Charm”