I promised to stop counting and even skipped writing about one ride, I think I succeeded. Mentioning a week doesn’t count.

He did great over the weekend. My patient, always concerned husband lead him around a little then let us off the leash to ride by ourselves. Rusty had been so reluctant to move at all on our last ride, I was feeling a little beat. This time he did good.

I had been talking to a friends husband, he got to go to a really great colt starting clinic last month and I wanted to hear everything he learned. That’s hard to manage at a kids birthday party, things like kids keep getting in the way. I mentioned our problem with forward. He said one of the things the guy talked about was exactly that, the lack of forward and straightness all colts have and how to work with it. He had recommended steering with one rein only and letting them circle until they reached your goal. It sounded fascinating and like the perfect cure. We had been using circles anyway to get movement and I have a bit of a tendency to apply a bit much rein pressure. This would fix all those problems.

We circled and circled and circled but we never got anywhere. Maybe if I had been there and seen first hand I would have had more luck but it just wasn’t getting us anywhere. So I fell back on the old standby. I asked for a step and clicked him when he went. Got a few more steps clicked, rewarded and all that. Finally he walked out nicely and we made it to the far end of the arena. I got off gave lots of scratches and treats.

I didn’t have a chance to work him again until today. It was our first time riding completely by ourselves. He was great. He is so light and responsive, I think that’s part of the reason he feels like a wet noodle. Touch him somewhere and he moves off of it, he’s doing some pretty sweeping turns on his hindquarters (for a baby that is 😉 ) and moves around well on his forequarters. Pick up the reins and his chin tucks right down, except when he’s reaching frantically for a cookie. But the wigglyness is fading a little, not becoming stiffness instead being transferred into forward, sometimes. It feels like even after years of riding and lessons I am just learning the basics. Forward equals straight, duh.

Our goal for the day was, again, the other side of the arena. It seems like a simple goal, and would be if not for the forward issue. Again I got a few steps and clicked him then tried for a few more. He would take a few then crank his neck up and around looking for his treat. He didn’t get one. Finally he gave three steps without stopping and I clicked him. Then four, then we walked nicely to the far side of the arena. I clicked him, gave him a good scratching and got off.

My goal is to make the far side fun to get to. Maybe next time we can make it to the far side and back around to it again. Yay for goals. He is coming nicely, I am very happy with taking it slow. There is no lunging, or round penning to take the edge off before getting on. I throw his saddle on and we walk out to the arena. He is not at all scared of me up on his back he just wants his next treat and to figure out how to get it. I can’t believe more people don’t give clicker training a try.

My mom keeps asking if he’s getting prettier. Either he is or I’m growing more fond of him, of course losing the winter coat helps. He didn’t have a pretty forehead, that was my main complaint, other than typical baby scrawniness. The other two are much older and have lots of character that shows in their foreheads. So I looked carefully and he seems to be growing some brain muscle. Tried to get some pictures of him but didn’t think I should pull out the camera while riding and the rest of the time he’s to close for a picture, this is all I could get. 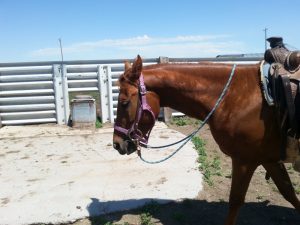 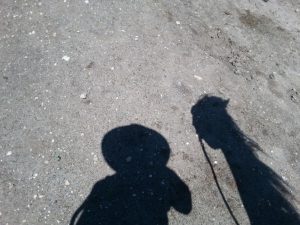 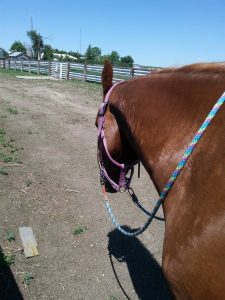