I actually rode Rusty yesterday. He was rotten, or perhaps I was. I’ve always believed that anything a horse does is the riders fault, it’s becoming an even more deeply felt belief lately. He hasn’t been ridden in awhile, other than our little bareback excursion. All he wanted was to stand by the gate, I fell back on the whole force him to do what I ask, if he gets his way he’ll think he won, make the wrong thing hard and the right thing easy, oh and throw in a little click and reward. Sure I was able to get him away from the gate. It wasn’t a huge fight. But it left me with a bad taste in my mouth.

In retrospect, it’s always easier to see what should have been done than what you should do, I should have let him stand at the gate. He could have seen that it was boring, he wasn’t going to get to the other horses and was not getting any cookies. When he walked away, even a little, I could have clicked and rewarded him.

There would not have been any fights, no thinking about rearing and we could have both felt better about each other. We, the children and I, are going to be leaving on a little adventure soon and are as busy as usual, I really hope to get back on him before we go and work on this. I hate to be gone that long and have this as our last ride.

The entire ride wasn’t a waste, I brought along his rubber chicken and we played fetch. Trying frantically to handle reins on a young horse who is being rotten while carrying a rubber chicken is not easy, once again didn’t die! I tossed it over his head and he went after it. He picked it up and flopped it around, a couple of times he even handed it towards me. I only caught it once. I think he enjoyed the game, we’ll have to keep practicing.

On another bright note our work on a simple bow is coming along nicely. 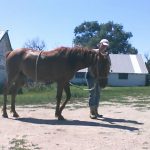 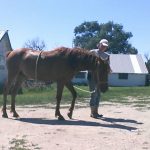 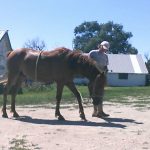 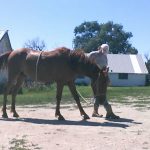 One thought on “Lessons Learned”