Not about Rusty but related I think.

The children and I headed off to see my family in wide spread and far away places. During the drive we slowed (slammed on the breaks, took major detours) to look at the Amish horses. 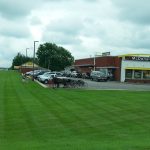 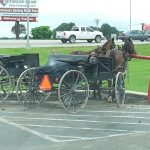 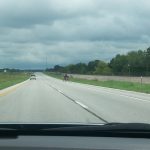 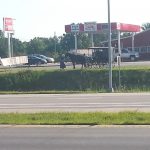 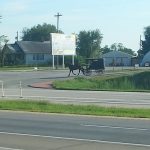 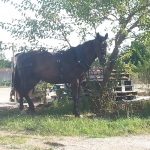 The tail end of the trip was spent with my parents in the Chicago area. We got to see my mom’s horses at the barn where I grew up. It was nice to be back, the barn is as beautiful as ever, even if greatly changed. I still think it should be blue but the red is pretty too. The pastures have been sold off and houses built. The horses now graze the hay fields, formerly off limits.

The horses were fat and happy. Skip, nearing thirty and no longer ridden, he’s too hot and wants to go more than is healthy for his age, came in for his grain and petting. Smoke who got too fat for his own good was up front in a dirt paddock trying to prevent further laminitis. He came in for petting if not grain. And Indy, another horse from Forever Morgans. Hugely tall and lanky he was a show horse then an Amish buggy horse and now the only horse mom has that is rideable. He’s twenty four with the most beautiful legs I’ve ever seen and still sound and happy to go.

I took a lap around the arena, tried his trot out. It’s huge and barely rideable, in another life he could have been a pretty fantastic dressage pony. He felt awesome so I gave the kids each rides. Then we cleaned pastures, who says all the fun at the barn is to be had riding. 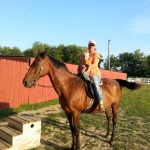 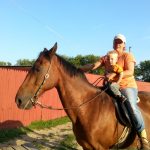 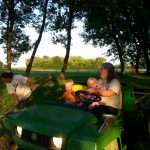 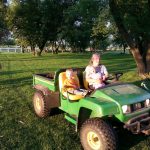 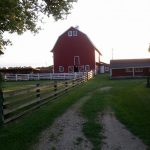 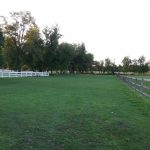 For a birthday, Christmas or just because she’s a good mom present my mom got me a lesson with an awesome trainer. Juan Carlos has a stable full of gorgeous Andalusian stallions, one mare and last years foal, sold already to Medieval Times. Who’s head trainer is the trainer he rides with by the way. We got a tour of his little barn and the beautiful horses. A big black stud whose beautiful Spanish name I can’t remember. His long black main was being unbraided by a friendly and rather unlikely man who owned this beauty. He was very justly proud of his pony telling us how the horse used to belong to a Mexican movie star whose name I didn’t know and of course can’t remember.

We saw the mare, the foal, a big bay stud all of them with beautiful Spanish names that I can’t remember and a grey stud, whose name I can remember only because it stood out so among the very Spanish names, Winston. We oohed and awed and stared in wonder while the great trainer saddled the big bay for me to ride in the lesson. I felt bad about having someone else saddle my horse for me but also understand not wanting some random stranger messing with your horse. But then, I got to ride him!

A couple of slaps of the stirrup leathers asked the horse to park out allowing me to get on easily. Once on I knew for sure I was riding a Cadillac. A very patient one at that. He and his owner were very patient with me as I tried to figure out how to ride this incredibly well trained horse. Juan Carlos walked along beside us and gave cues, I simply sat there, while the horse, I wish I could remember his name, did the Spanish walk, Piaf, Passage, all sorts of wondrous things. 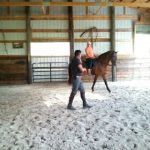 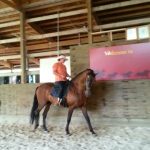 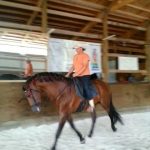 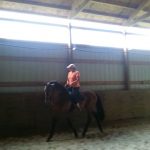 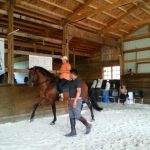 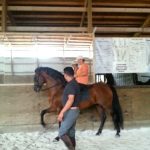 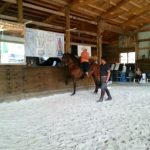 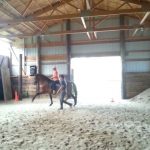 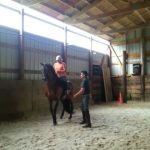 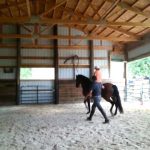 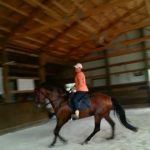 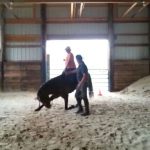 I had a loose idea of where I wanted to go with Rusty before this. I wanted a good little cow pony who could do cool tricks but I had never seen anything like what the finished product could be. Now I know. Not that I have any hope of ever being anywhere close to this but I can strive for a much lesser version.

After letting me ride his great horse Juan Carlos got on Winston and gave a demonstration of what his horses looked like with a good rider on board.

After the beautiful demonstration he let me get on and walk around on Winston. He asked me to try for a canter but I failed completely totally and miserably at that.

2 thoughts on “Our Grand Adventure”