Loved the book. The movie is the typical hollywood ruination of all things good, especially where horses are involved. Not just that they made Flicka black, or the star became a girl*. I expected that after they took the beautiful bay Morgan in The Horse Whisperer and made him a plain, ugly, sorrel quarter horse. The horrible part about this movie, one of many that is, was when she took a horse that was really going pretty well, in the round pen, and decided to head out across country without first having a good solid foundation. Putting not only herself, I can only care about that so much, she was an idiot, but what little good training she had done and the future rideability of the horse at risk.

How does any of this apply to Rusty?

Imagine my surprise when it dawned on me that I was recreating the very scene I despised so much. I had brought Rusty in and worked him a once on the ground since his time off during our adventure. He was as responsive as ever willing, pushy offering many things I wasn’t asking for along with everything I did. The next time I worked him, after our ground work, I asked him to come to the fence for me to sit on him, he walked right over and sit I did. Then I thought what the heck and asked him to walk off. In a halter, with the lead rope attached to one side for a rein, no saddle and out in the yard.

Unlike the movie he didn’t run off and I didn’t fall off. I like to think that I had a lot stronger foundation on him than the silly twit in the movie. Nobody died, so we repeated it the next day. He seems to like it much better out of the arena, none of the sulling up and refusing to move, no getting light in front or back hunching. He walks off willingly and straight. He gives me nice turns on both quarters and stops to a big exhale. Better bareback than with a saddle but I think the other benefits make a saddle preferable still. So really was it a repeat of the movie? Or a fairly safe move on a horse that is well started and has always been willing to try everything I ask?

We have stayed out of the arena since then. The driveway behind our house is my favorite arena anyway. He had been a little looky towards the chicken coop and that scary spot, for all the horses, where the cousins feed their bottle calves. So we walked back there and did some grazing and fetch with is chicken. Now he really wants to go that way, I don’t so much, lots of scary stuff and tight quarters that I don’t feel up to facing from his back even he thinks he’ll be fine with it. He happily offers to head out the other way too, between the tractors parked on one side and the shop with all it’s scary stuff on the other. I got off the first time right between the scary stuff and we walked down towards the quansit. The next time we made it up to the front of the in-laws house. He was the one who decided it was time to stop, it’s another really scary spot for everyone. Coyote still has a fit every time we go through there. So I got off there and we walked to and through the corner of the pivot that I hope to use for a nice big, open arena until it gets planted to wheat. With any luck that wont be for a while.

He’s even more fun to ride out and about than he was when confined. He seems to like it much better too, no future as an arena horse for him. 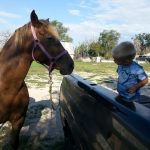 The youngest and I have been going for daily rides 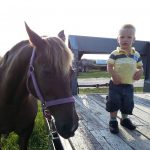 I’m glad he likes Coyote, hopefully Coyote can be his someday 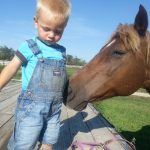 I know a horse can never compare to a tractor but…

*Not surprising with the current fad of strong woman role models, unfortunately that goes hand in hand with a lack of strong men for the boys to grow up with. Why did they have to become bumbling fools for the women to be strong?

4 thoughts on “My Friend Flicka”