I’ve been taking the youngest out for rides on Coyote in the mornings while the oldest is at school. I’m glad he’s liking horses, I thought he’d be tractors and nothing else. One morning I went ahead and turned Rusty out in the yard to graze while we rode. We left him behind for the first part of our ride, fortunately he can’t really come with out through the corn field. But when we got back into the yard he started following us. I decided to have some fun with it and see what he would do.

Just about anything apparently.

There are some big round bales stacked in rows, instead of piles, the youngest was enjoying squeezing between them. He kept pointing and laughing wanting to go back through. Once we picked up Rusty he was happy to follow us through. The row we could fit down was narrow enough that I had to squeeze my legs tight around Coyotes rather considerable girth and they still rubbed against the bales. Even walking between the widely spaced tall stacks of hay is a little like walking through a tunnel. He doesn’t mind one bit. He happily follows past the equipment, semis and trailers, tractors and the quanset. 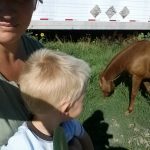 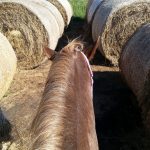 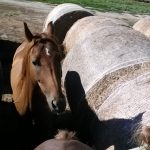 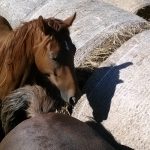 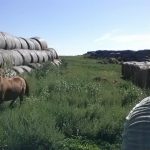 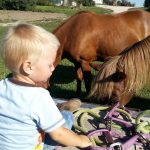 Tanna came out yesterday and rode with me. She hasn’t been out since the middle of July, we missed her. Rusty hadn’t been ridden in about a week, I had been sick then busy. Tanna rode Princess onna and gave us someone to follow. We went back out past the in-laws house and the scary trees into the corner of the pivot. He had a small melt down coming off the road but Tanna came back for us and we made it out into the middle of the field. Where he had another melt down and I decided it was a good place to get off and let him hang out while Tanna worked with Onna.

Today I made it back out to work him again. The wind was blowing and he was feeling skittish. After some ground work I felt OK about getting on and let him go where he wanted. He took off at an enthusiastic walk past the shop and tractors and all the scary stuff by our little arena/driveway and down towards the quanset were he and Coyote graze. Apparently that’s his happy spot. I’m not brave (stupid) enough to try the bales on him yet, maybe he’d be fine but I’m not going to find out until we have consistent steering.

He found the other horses in their pen and really wanted to go that way, and reaffirmed our lack of steering. His wet spaghetti noodle imitation was back and he feels like he’s going to topple over any second. We didn’t die, he didn’t take off for the others. Instead we did some circle type things and headed back towards the house. The first time I’ve ridden him towards home! Usually ( all three? times now, four counting this one) I dismount and walk him past scary stuff and out farther first. We still didn’t make it home. He really wanted to go the other way and I’m not willing to fight a wet spaghetti noodle. I got off.

Back at the house I got back on. From the ground for the first time! We practiced some steering, he appears to have difficulty turning right. To the left he went without any problem. To the right he threw his head and tried to fall over. I thought about it and realized that was the way we were going, or trying to during any difficulty we were having while out and about. So we did it a few times until he gave me some good turns then I let him go. Can’t wait for our next ride.

And just for the fun of it, happiness:

One thought on “Playing Games And Riding”