8 wanted to go for a ride. He makes his wishes known and I seldom have trouble deciphering his wants. Often they nearly give me a heart attack, but at least I know what he wants. And never to look away, even for one minute.

So we went for a ride. Rusty was already out so we let him follow, or not, as he wished. They had just been turned out on the fresh green grass for the morning so Rusty wasn’t quite as enthusiastic about following as he usually is. Not at first.

We made a lap around the yard, decided Rusty was probably going to stay back near Princess Onna and eat grass. So we went down the driveway, out between the fields, for a little longer ride. Rusty got worried as we passed the big house and the shop. He didn’t want to go that way, didn’t want us to either. He ran over and stood by Onna at the gate, calling. We looked back one last time as we passed the tree row where the fields opened p around us. He was still at the gate.

Over the slight hill and out of view we heard hoof beats thundering up behind. He had left grass and the company of another horse to come with us. I decided against proceeding any farther down the drive. 8 was trying to fall off peering back around me to see the neigh come. We went into the unplanted corner of the pivot instead.

Rusty galloped happily in circles around us. Making Coyote really mad, knowing the grouchy old boy could only do so much with riders on. I often wonder if Coyote waits until they are back in their pen and gets him really good. I wouldn’t blame him. Rusty cut close in front of him, then stopped to graze. He galloped up be hind and brushed against Coyotes rather large behind as he passed. But he didn’t even look at the corn.

I was sure to stay a healthy distance from the golden, rustling crop, but though he investigated in that direction a couple of times he never ventured far enough to take a bite. We made a couple of laps, until 8 started to squirm, then headed back.  Dismounting on our favorite flatbed trailer, we unhaltered and turned them loose to eat. 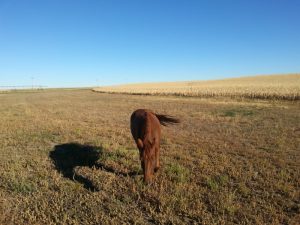 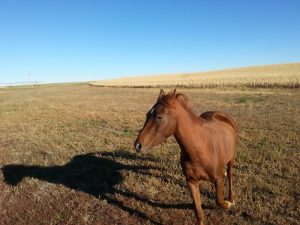 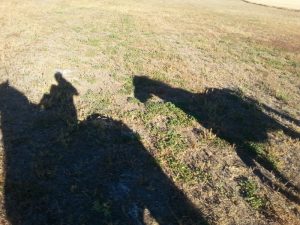 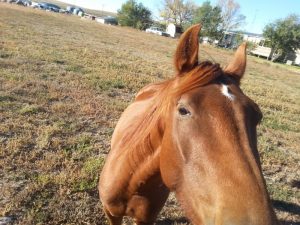 One thought on “Freedom To Choose”