My phone says 12, I always forget that we have a thermometer, it says 10, and the wind is blowing. But I couldn’t resist besides the horses have been running to the gate begging for more cake every time we set foot out the door so Rusty was up here and ready.

I’ve been enjoying the (free!) course from Hippologic and went through the effort to write down my goals as she encourages, and the steps in how to get there. With them written down and a new video freshly watched I was full of ideas and enthusiasm to try them.

The theory is great, the reality is a little trickier. Not that it didn’t work, I think we made some pretty good progress, it’s just that Rusty is, well, Rusty. He is an interesting horse, I’m kind of glad not to be starting him the “normal” way. Not that I think he would be bad, but. I’m to old for hair raising rides like I remember taking on Coyote way back when.

He was very enthusiastic and energetic.

He wanted FOOD. He wanted FOOD NOW! I was wearing gloves on already chilled fingers, I had to find a cookie and get it to him before his head exploded. He was offering increasingly robust paws, we got the height I was hoping for. They were definitely paws not a walking step and not usually on the foot I was asking for. And we had been making such good progress on that 🙁

I wasn’t sure if I should reward him for a very good step? Or hold out because it wasn’t what I was asking for. I held out. He was doing all this while standing on top of me and I kept dropping cookies as he dove at them frantically with teeth bared. There was no way I was going under his feet to pick them up. Unfortunately I have just read an article about how we should make our training criteria so easy for the horse that they have a 98% success rate. So if he’s getting frustrated and pawing out of frustration thus causing me to wait even longer before rewarding that means I am doing it wrong. But how would I have made that easier? It was something he knew, we work on it regularly. Maybe it wasn’t me making it too hard but him being worked up from the cold and wind?

I’m not saying it was a bad lesson, that we didn’t accomplish anything. I think we did actually. He achieved some pretty good forward while giving nice high steps, kind of. He gave good, deep, long bows. I felt safe asking, even in this miserable cold weather because we were working in the old garden plot and the ground was nicely tilled.

Mostly, maybe, I learned that sometimes it might be best to skip the lesson and stay inside. 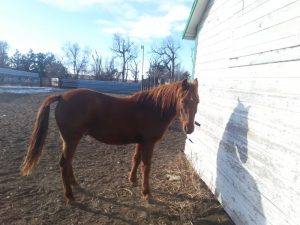 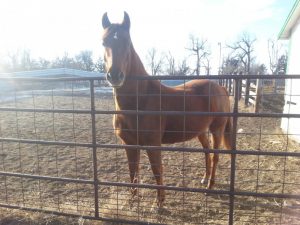 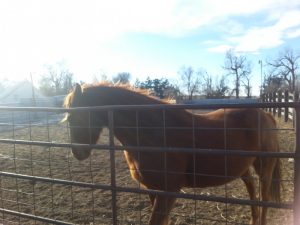 What if I paw? 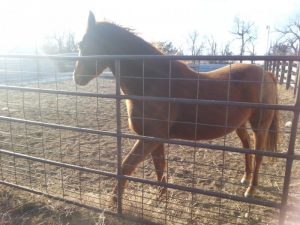