I’ve mentioned the book my mom wrote haven’t I? If not, well, I meant to. It was a Christmas present for The Goblin Child but I took it away after reading it to her once. I wanted it.

It was too good, something had to be done with it. So I’m publishing it, more on that here. It is about us, me and the kids, riding to a “mountain” that is down the road from our house. We can see it from the fields where we ride and The Goblin Child has wanted to ride to it since she first noticed it. In grown up distance it’s about four miles away. In riding with two small children distance it might as well be a hundred miles away. The Goblin Child and I made it to the gate once. We can’t go clear to the mountain, it’s in somebody eles’s pasture.

Going down the driveway we were nearly run over by a UPS truck. Then Daisy finally caught up, then Rusty got stuck on the wrong side of the fence. Somewhere in the middle of all that I pulled my phone out to try for a selfie that included all of us, and dropped it. There I was bareback, double and ponying another horse and small child and somehow I needed to get my phone back. Once I picked 8 up off the ground when he decided he wanted up after all, I thought maybe I could do it again after finding a good bank to get up on.

I got 8 set down on the ground when it occurred to me that maybe I could skip the getting off part. With a little coaching 8 got the phone and handed it up to me! Then all that was left was to get him back up. I worry about pulling his arm out of the socket. He grabbed my hand and, as I sat worrying, started jumping happily. He jumped I pulled and he was up in front of me once again.

We went out a little ways then turned back and the horses went insane. They wanted to go home! Onna was prancing, pulling at the end of the lead rope. Coyote was tight and wanting to prance too. Somehow we made it without anyone getting killed. I was sore and exhausted by the time the kids got off and the horse were put back but it was a fun ride, hopefully we can do lots more of them as the weather warms up. 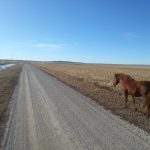 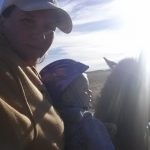 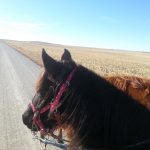 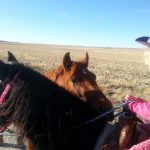 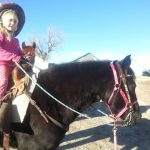 2 thoughts on “Ride To The Mountain”