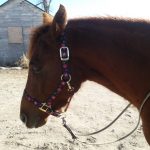 We’ve been out riding the other two horses lately. The weather was nice a few times, Tanna came to play, for whatever reason we doubled up or ponied and all went riding. Except Rusty.
He didn’t stay with us very well last time, it’s muddy and easy to leave tracks in the fields or where we went wasn’t safe for him to wander freely. He had to stay home. He did so screaming and running the fence line.
At least one of those times, was when Tanna was here to play (video of that working >here<). I wanted to work with Rusty as soon as we were done riding.  As I lead the other two horses back into their pen Rusty nearly knocked them over trying to rush out.

He may have been upset about being left behind but mostly he did seem to be mad that the other horses got worked and he didn’t. He had no interest in being with them after the separation. He was frantic for a treats and attention.

He has run back to his buddies a couple of times when we are out wondering about. Usually he got scared or I was asking too much and giving too little, he runs back to me though when I call. Every time I step out the door he lifts his head up to peer over the windbreak and starts calling. I feel dreadfully guilty anytime I don’t work with him. When I go out and bring in Coyote instead, I swear his little heart breaks at the betrayal. He screams and pushes and tries to squeeze out the gate. It is a perfect opportunity to work on manners. Unfortunately that is usually when I’m rushing and don’t have time. If I am just out visiting he gets rewarded for backing up, out of the fray and away from the group.

Starting horses the old way I was used to horses that were usually pets suddenly not wanting to be caught for the first few weeks. This is a pleasant change. 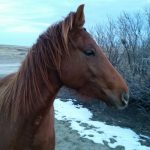 I was convinced that his star was changing shape 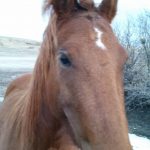 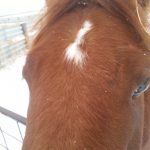 Maybe a little but not as much as it seemed