I don’t remember when it was that I rode him last. In the fall sometime? It’s been a few months for sure. I had a slightly longer than normal time to work him two days in a row. The first day I saddled him and worked on painting. You might remember the video. I wasn’t wearing my helmet and nobody was home, it wasn’t the right time to get on.

The next day my husband was home and working around outside the house. I told him I was going to get on, thinking he could look over my way once in a while and keep an eye out for a lose horse. He quit what he was doing and came over to watch. He worries about these things for some reason 😉

It wasn’t a pretty ride. There was a semi parked in our arena. Rusty really wanted to stand next to the corner of a shed, with an overhang of sharp tin and a muddy spot around its base. Nobody died though and that always a good thing.

Now we are supposed to get more snow and the wind has been howling so I haven’t had another chance. Hopefully we’ll get another chance or two before summer. The video is too long to load here so I might try to load it onto facebook, check Rusty’s page to see if I get it done 🙂

Lacking pictures of Rusty’s ride here are some pictures of the kids being ridiculously cute with their horses. 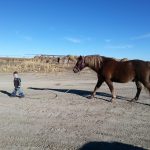 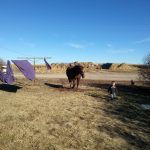 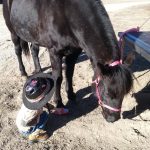 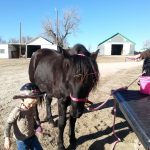 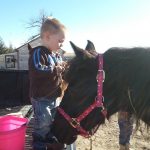 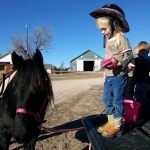