We have been making a habit of sorting out the pairs on Fridays. Tanna comes over and we spend most of the day horseback. Sometimes we even have enough energy to work with Rusty afterwards, not very often though. Today was different. Today her brother was going to a branding with his horse and would have the trailer on. She was able to convince him to bring her horse over. Then he decided to come play too!

With Tanna riding her horse that left Princess Onna free for The Goblin Child to ride. I bundled her up toasty warm, long underwear, scarf, hat under her helmet. Last time she got cold and wanted to go ride in the payloader with her father. Last time she was riding double with me on Coyote, I must admit it was easier without her help as much as we enjoyed it.

Tanna’s horse is Jerry. Jerry was my mare that I showed on a decade ago this year, time does fly. It was nice to see her again. She and Tanna are doing very well together. Her brothers horse is a big young quarter horse. A sorrel to match the other two, Coyote and Jerry. We were all nicely matched, he is a flaxen even, except Princess Onna of course.

The Goblin Child and Princess Onna did very well together. T.G.C. even enjoyed the trotting we had to do to get around a couple of calves. But soon enough she got cold. Apparently I didn’t bundle her up enough. It wasn’t entirely a bad thing Princess Onna isn’t the funnest horse to pony and combined with the deep mud in places having them along mad life a little difficult. It was great the she got to come as long as she did though.

There were quite a few calves born over the last week and with all of us out there we made quick work of them. My cow hating husband was working mostly on foot as his dad rode around on the four-wheeler with 8 in front. I would wave at 8 as he went by and, from his position laying down on the gas tank, he would grin back at me.

There are lots of gates. Lots and lots of gates. They would be more convenient for me with horse friendly latches. This is a four-wheeler outfit though and being handy for me would mean unhandy for those guys on their four-wheelers. Opening and closing these gates from a horse requires leaning way down off the side and spending lots of time fiddling with chains run down around or over.

I should mention that my cinch is never tight. Coyote and I consider touching his stomach to be tight enough, and that’s at the start of the ride. I lent him to a guy once, and only once, who threw his saddle on and yanked the cinch tight. In protest Coyote threw himself to the ground. He is clear in expressing his opinions.

I was heading back to the others and pulled the gate closed behind us. It latched in a corner, requiring a horse to curve into the corner to reach. I leaned over and stretched. Despite my constantly loose cinch even corner gates aren’t usually a problem, as long as I pay close attention to balance. I was leaned clear out reaching to wrap the chain around another gate and I felt my saddle shift. I pushed back but it was too late. I was up against the fence so I just grabbed hold, no problem. I hooked an arm over the guard rail and hung on. It dug into my side a little, hurting just a bit. I rearranged and pulled my feet out of the stirrups. Or tried. My mud boot was well wedged. Not stuck hard but I was right up against him and didn’t have room to pull if it didn’t slide out easy. I finally wriggled around enough to get both feet on the ground and keep my saddle from ending up clear under his belly.

Now my saddle was well stuck on his side. I glanced up once in a while to see if everyone was watching my fiasco. They appeared to be busy. The cinch wasn’t tight enough to hold the saddle on but was to tight to let me pull it back up. I yanked and tugged then went around to the other side and repeated. He wanted back to the others and was done standing still. As he circled I tried to loosen my cinch without letting it fall into the deep mud. I pulled then went around and pushed, finally it rolled back to the top. I snugged the cinch up, a little and climbed on.

I thought no more about it until afternoon as I rested during the kids naps. My side hurt. I ignored it but it kept getting sorer. I asked my not horse person husband if there was a bruise there or something? He was horrified, there was definitely a bruise. A big one. As not a horse person he can never understand why I love something that causes pain more often than not. I was rather impressed that my brief moment of hanging on the guard rail, apparently the sharp edge of it left such a beautiful purple bruise.

It was a good day though we got most of the calves out and put Tanna’s brother to good use. It didn’t even rain on us! 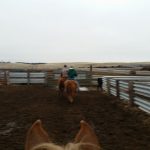 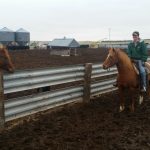 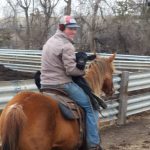