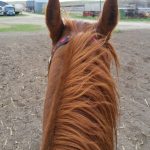 He’s a high double swirl. I can’t say I didn’t know what I was getting into. Complicated, intelligent, and sensitive, instead of being warned off I decided he was my kind of man.

This ride was a bad idea from the beginning. I hadn’t touched him in weeks, I had hardly seen him other than to say hi in passing. Why did I think I should even try? Still here we were. The clouds hung low overhead, not warm but not cold, the wind finally quiet. My sweatshirt left me feeling clammy but I hated to take it off. Next to me he was walking on eggshells already, not the attentive, responsive horse I had last ridden but one who wanted nothing to do with me his only interest in the lush green grass at our feet.

In my husbands beautifully worked garden plot we stopped. Surely as long as we stayed out of the part so meticulously marked  he wouldn’t be too mad. It makes such a nice arena and I would appreciate a soft place to land. After a brief, absentminded warm up I climbed on. It was a new place, a different mounting routine, I was doing everything out of order and  backwards.

Rusty was concerned. His tippy ears were flicked back, straining to catch my every move. His neck tight, jaw tense. Trying to remember to breath, deep long breaths, I thought calm into the back of his head. Trying to ignore my nerves I breathed out my fear and let my muscles relax. With a squeeze and a cluck and a firm “walk up” I urged him on. Remembering his lessons he moved forward. Immediately I clicked and fed him his cookie. He slammed on the brakes to take it. We fluttered about our makeshift arena like a butterfly or perhaps the unicorn his delicately tufted fetlocks proclaim him to be. No straight lines or clear circles, just a question and his flittery response so light and quick. Until it wasn’t.

He was done and he was leaving. No running, just a simple refusal. He was going and there was no turning him so there we sat, him unwilling to go back as I sat and tried to think what I could give him so we could both win. I want him to have opinions, a mind of his own. I hope he will be like Coyote, a thinker, strong willed, a partner instead of a servant. Then I think of all the trouble that causes and wonder why.

So we went. He wants to go, out and about, a big country horse who can’t stand fences closing him in. I knew what he wanted but his small leaps of enthusiasm discourage me from giving the freedom he craves. I had meant to go out through the corn field today, hurry and make use of it before they plant. We should have gone, my caution gets in the way. I fear what the excess of enthusiasm could lead to, not that there is a mean bone in his body. Rusty would never purposely hurt anyone.

Instead we wandered around the yard, a delicate balance of wills. Holding tight while he demanded his direction then asking diplomatically for a concession. We circle to the right, always hard for him, his nose tips in as his shoulder drifts off in a different direction completely. But we are moving and to the right.Should I ask for more? What aids do I give without a bit? I hesitate only briefly wondering about technicalities, then tighten the outside rein and tighten my calf. A light aid on a green horse but he straightens and gives a step on the circle. For a moment in time we think as one connected by through my seat, his back. I click and the moment is gone as he stops to receive his treat.

Finding a good spot I exhale, breathing out a soft whoa. With a flick of an ear he stops. Feeding one last cookie I slide off. Against all odds and good sense we rode. Searching through the differences of opinion and our fears we found a place in the middle where we could both agree. A place where we could communicate.