I have so many other things I want to write about, mostly my really bad ride on Rusty yesterday, but my mom sent me a link and I have to share it.

I’ve told Coyote’s story so many times before but I will recap to explain the importance of the link my mom sent. She was at a little horse fair in northern Illinois watching the horse sale they put on. It was the usual run of quarter horses, nothing horribly interesting, not that she had the slightest intention of buying anything. She was only watching because she was there.

Then three young Morgans were run through the ring. The first sold for a good price. My former dressage instructor was there watching to and got excited, bidding on the first price offered. The other a beautiful chocolate with flaxen mane and tail, sold easily. The third was a scrawny ugly little sorrel colt. Not having any intention to buy a horse she watched him sell for a couple hundred dollars. When she realized who had bid on him she was horrified. It was a man we knew mostly by reputation, he would show up at the team pennings we went to and word would spread like wild fire, “that” guy was there lock your trailers and watch your horses. Nobody was ever glad to see him.

She couldn’t stand to see this poor, ugly little Morgan in such bad hands and sent my brother to make an offer. The guy made an immediate profit on his horse and my mom had to figure out what to do with the horse she had unintentionally bought. Fortunately the dressage instructor hauled him home along with the one she had bought. Coyote received a name change, to Coyote, and was sent out to me to start. He quickly outgrew the ugly duckling phase, becoming huge and beautiful, a joy to ride. I couldn’t live without him and never let my mom have him back. That was nearly twenty years ago, he has been well loved, treasured, ever since then.

Had my mom not been at that sale my Coyote could have ended up suffering the same fate as other horses owned by the guy, starved, miss treated and left to die. He was finally picked up for his abuses and is facing charges. There is never punishment enough for these people but something is better than nothing. Animal rescue doesn’t have to involve kill pens or animal shelters and seldom the humane society, instead, so often and so necessary, it is people doing the right thing when they see the need. 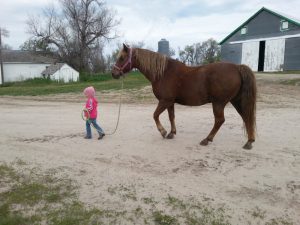 One thought on “The Reasons We Rescue”